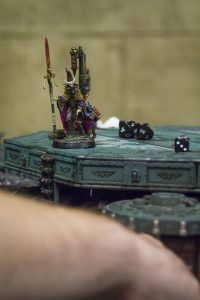 Old Mother One-Eye staggered across the conduit platform clutching her dueling wounds. Thin trails of silvery blood seeped between her skeletal fingers, hanging in the air like oil on water.

Her warp portal lay in ruins, carved apart by lance fire from an orbiting voidship. Sickly green lightning arced from the remains of the obsidian pillars that held the portal in place, the impotent rage of the warp venting harmlessly into the dissipating storm high above.

She spat a thick gobbet of black phlegm onto the floor and let out a furious, ear-splitting shriek. The servants of the corpse-god had broken into her home, butchered her children, destroyed her work and secured themselves a fate worth than death.

“Fools!” She cried out, summoning the remainder of her will to push her words into the souls of every being that sullied her home, “Can’t you see what you have done? You have doomed us all! Only I have the power to protect us from my master! You blind, misguided fools!”

Pale green spectres danced around her like a children’s playground game, taunting and mocking. The asteroid shook violently, a hungry stomach anticipating a meal. Warp fire poured from the void in the centre of her forehead as she lashed out at things imperceivable to the mortal eye. 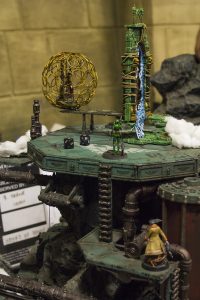 Interrogator Dune slumped against an oily metal ladder. He was as battered and broken, forcing himself onwards despite the daemonic venom coursing through his veins. Above him was the platform the conduit was operating from before it was annihilated by lance fire and a strafing run from an inquisitorial Valkyrie.

He couldn’t take her alone, and the other agents he had encountered couldn’t be trusted to back him up. His splinter pistol was running low, and would it even do anything? He had watched a trained assassin try to take her out, only to recoil in terror and flee for their life.

His hand rested on his belt in exasperation, feeling a familiar shape on his fingertips. Realisation slowly crept across the scars of his face. The gift from his master!

He snapped the psyk-out grenade from its webbing and felt its weight. This had been given to him when he attained his rank, and carried it with him for over a decade. He muttered a prayer of thanks under his breath and activated the fuse rune.

With the last of his strength he pulled himself from the support of the ladder and into the open for a clear throw. The storm raged overhead. The witch was surrounded by warp lightning, screeching in anguish. Chaos spawn bore down on them.

He roared, drowning out the storm; “Mother One-Eye! You have been weighed, and you have been found wanting!”

And the grenade left his fingers. 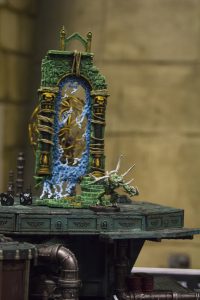 Mother of Mercy was a 1-day 54mm Inquisitor open event held at Warhammer World in Nottingham on November 18th 2017 and ran by the Conclave Inquisitor community.

It followed the potentially calamitous events of a powerful witch trying to cut off two co-dependent sectors from each other with great warp storms. It was set on the station of Mercy, an archipelago of asteroids and docking platforms lashed together with great chains, far away from help or support of the character’s usual network of spies and agents. You can get the whole brief that was handed out to the players on the day here.

Over a dozen people gathered on the day  with beautiful painted warbands, some made specially for the event, and the whoops and hollers of the day attracted dozens more to our tables to stare at the funny sized models and the giant scratch-built 54mm valkyrie. Thanks to the efforts of one of our community we also had leaflets to hand out to onlookers about the game and how they could get involved. If even one person discovered a new passion for the quirky narrative skirmish wargame then it would have been a success. 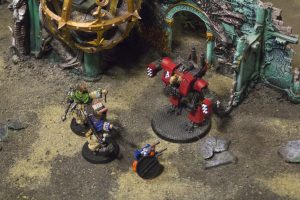 The day was spread across four of Warhammer World’s “feature boards”, set amid the noisy backdrop of their annual 40k Doubles tournament. It worked out well, with three boards being used for games and the final board being used as the inevitable ‘overflow’ at these kinds of events – a storage for spare models and collections of character sheets.

Next time I’ll make sure not to double book during another busy event so we can snag a few of the ‘plain’ boards. We had the perfect number of people this time, but it would have been nice to have some backup boards to run some extra games on for latecomers. 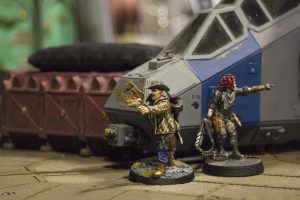 The day was run across 3 games: two smaller games and a finale on the epic mining facility board. That is a schedule that has worked well for these events in the past and I didn’t want to mess with it. One element that is always a conundrum is how to run the finale game. In some events we’ve had a mega-board with every player present, in some events we’ve had no finale at all,just another opportunity to score points or victory tokens and have a wrap-up in the bar afterwards. 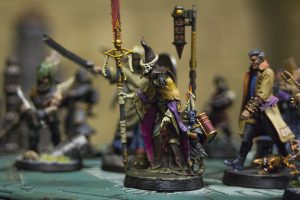 This time I wanted to trial something a little different, using elements I’ve pinched from previous events. Throughout the day, players fought to complete universal primary objectives and were given secret secondary objectives to attempt as well, scoring you Victory Points that would affect whether your warband made it to the finale board or not. Anyone who didn’t make it to the finale board got to play on a satellite board for either control of a valkyrie or the targeting systems for an orbital lance weapon. The idea being you could still affect the finale even if you weren’t placed on that board.  Sprinkled in as well were some resource cards to shake up the early games, such as affecting deployment or rival warbands equipment.

It worked well for the most part, and although the feedback we received afterwards was very positive it did highlight some flaws in the formula that would need to be addressed before running a similar event;

All in all I had great fun running the event, and I’d like to think people who attended had fun as well. There are hundreds of pictures still being edited ready for uploading and I’ll be doing breakdowns of some of the scenarios and characters over the coming months to fill these hallowed Dreadquill halls.

Thanks to everyone for coming and keeping the hobby alive, and here’s to seeing you all at the next one!

The explosion had knocked Dune unconscious. The last thing he remembered seeing was the form of Old Mother One-Eye being catastrophically ripped apart in a fury of psychic energy.

He was covered in dust and ash and the lair filled with the shouts of survivors. The air was calm, and although heavy with soot, seemed far easier to breathe in.

It was done. The sector had been saved. The Throat would remain open for humanity to come and go as it pleases, just as the God Emperor intended.

He coughed a mix of blood and ichor onto the metal platform and tried to pull himself up, but his strength had left him.

Stood above him was a blurry figure. Dune’s eyesight hadn’t fully recovered yet, but even blinking through tears and ash he could recognise the silhouette of that damned hat anywhere. The figure extended a hand. 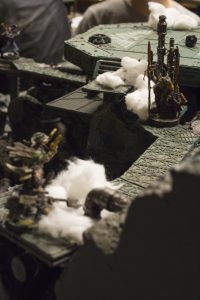 It’s time to sell off one of my mega box of bits on ebay! (link)

I simply don’t have the space or inclination to hoard any more bits than I have at the moment would much rather they went to someone who can make use of them rather than a dumpster.

All this stuff has been accrued over 25+ years of hobbying, some parts are well loved, and some parts are still new on the sprue. I like to think I have a decent eye when it comes to identifying models, but even some of these bits baffle me. If you need clarify on anything in this big ol’ box of stuff then just give me a shout!

This list is FAR from exhaustive, but from what I can make out from rooting through the box, we have components from:

The Mega Box of Bits ebay lot is available here, and it ends Sunday night (tonight) at 8pm . 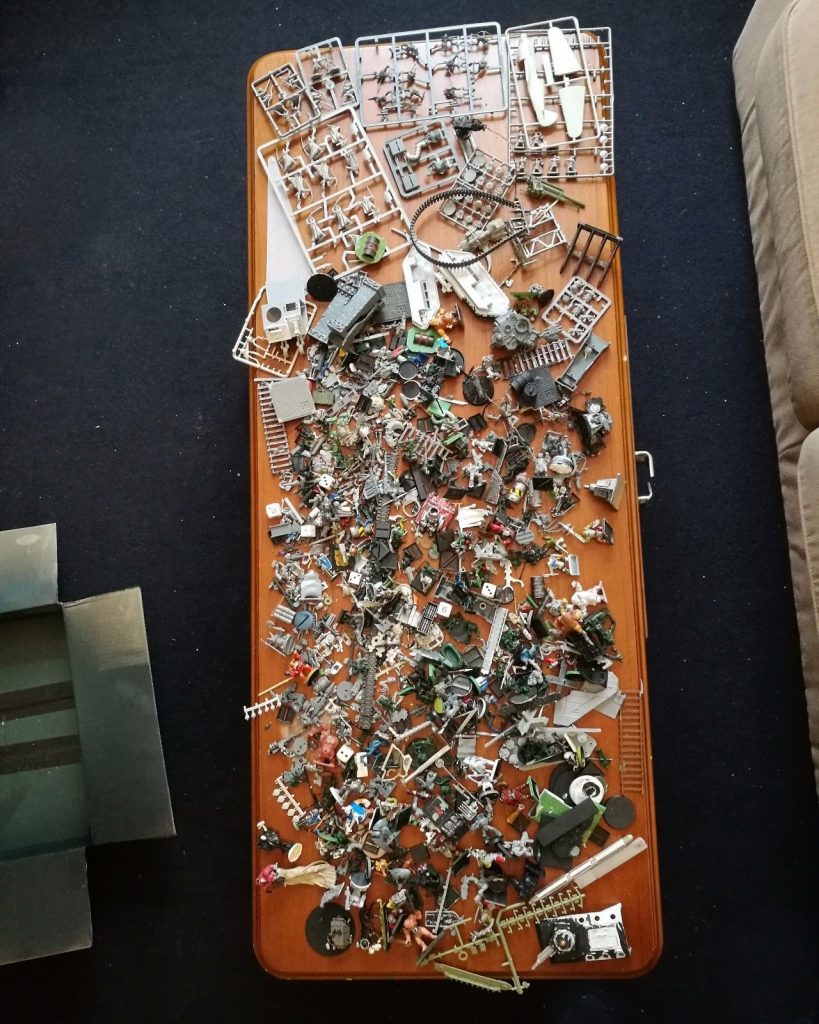 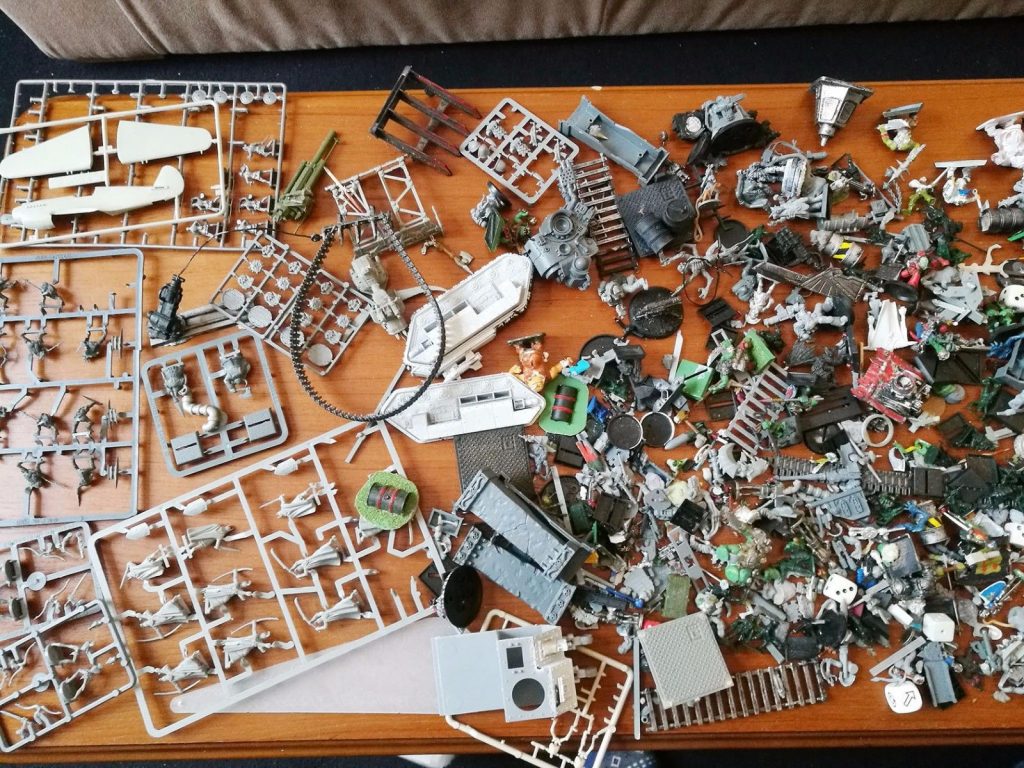 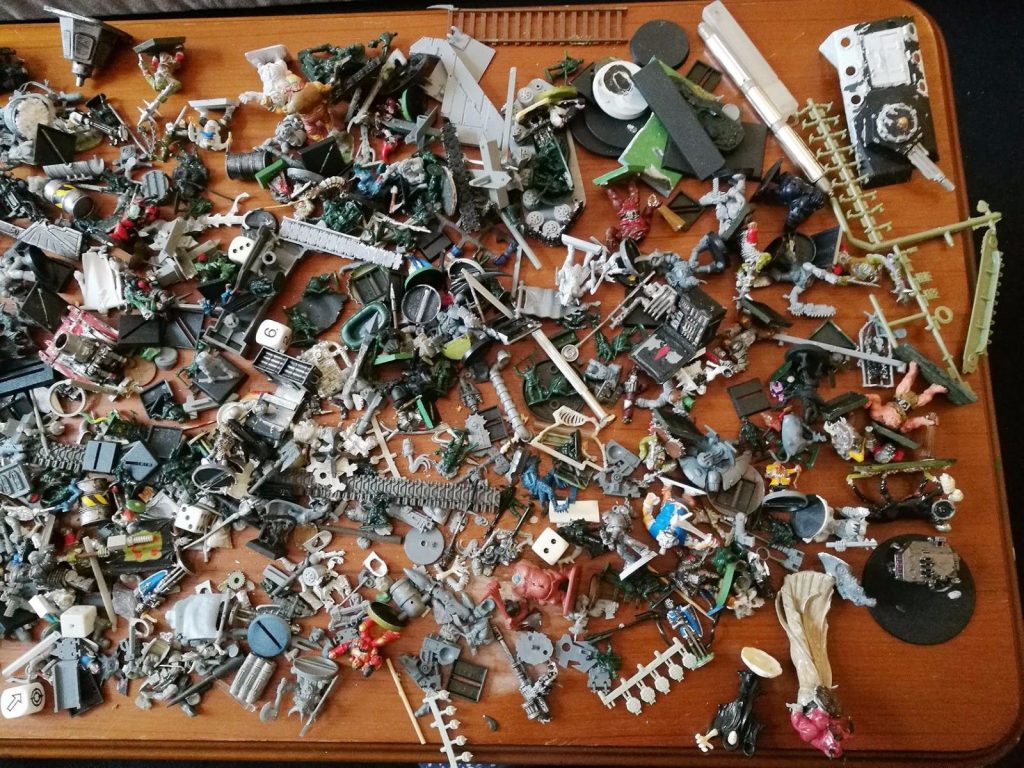 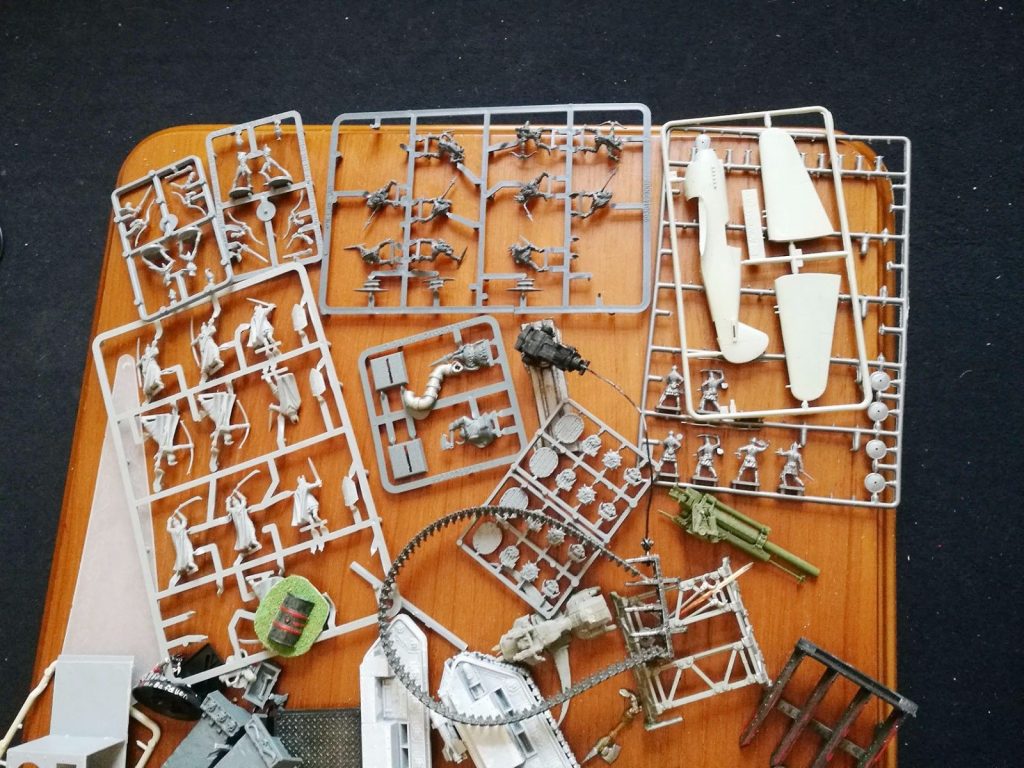 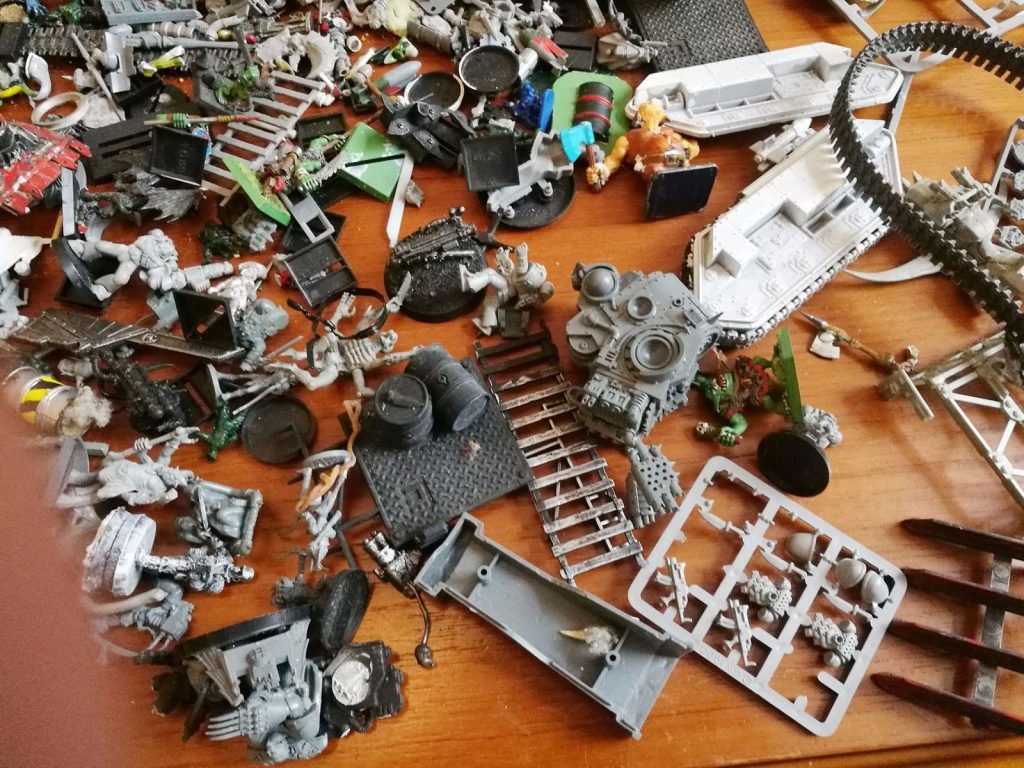 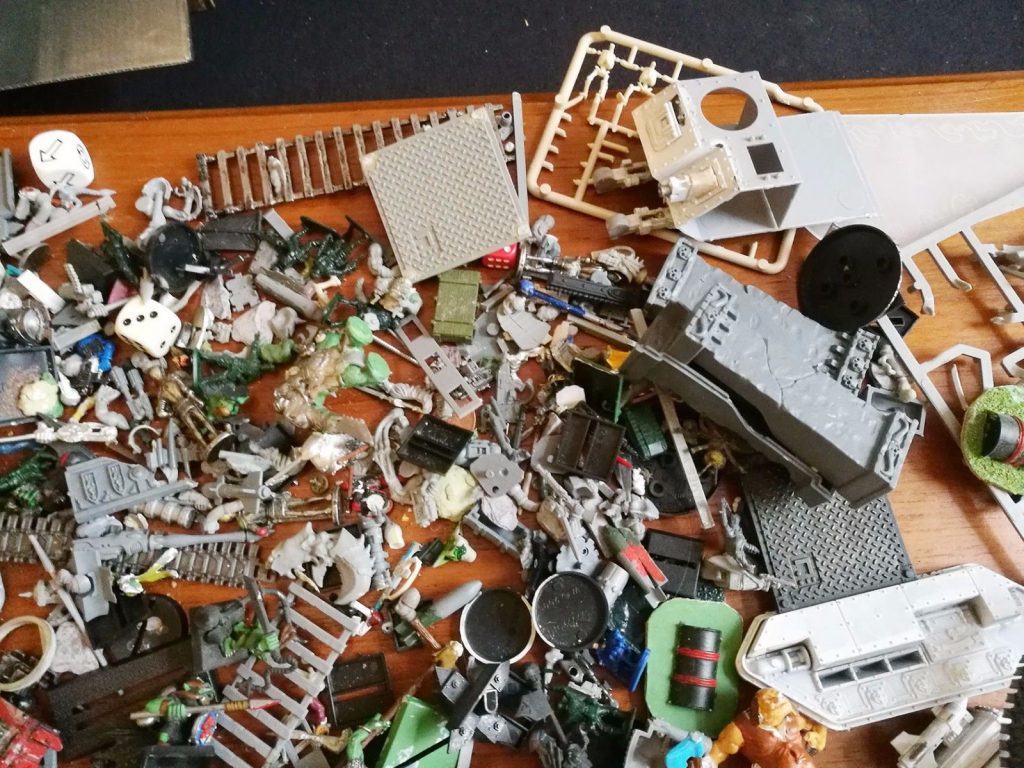 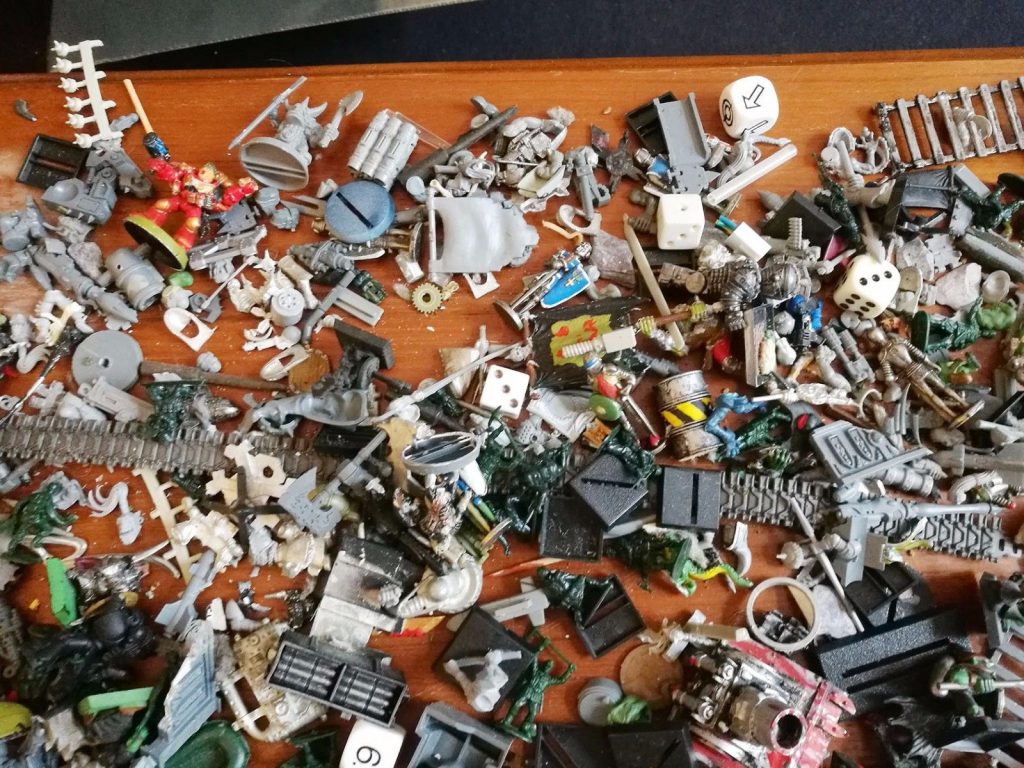 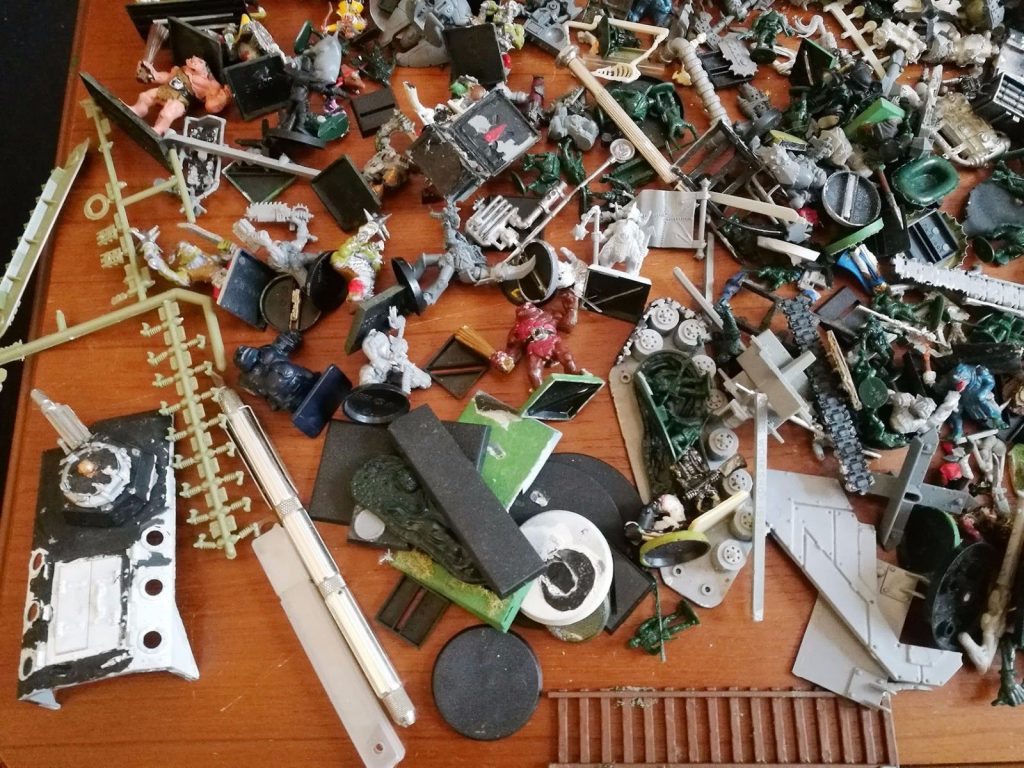 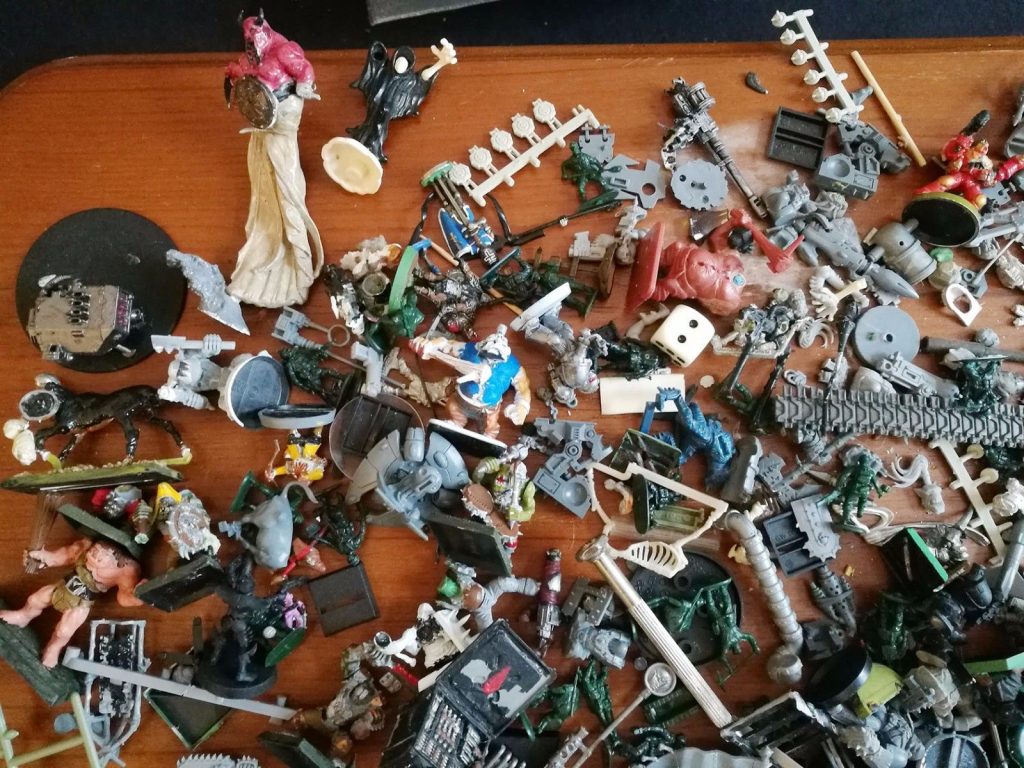 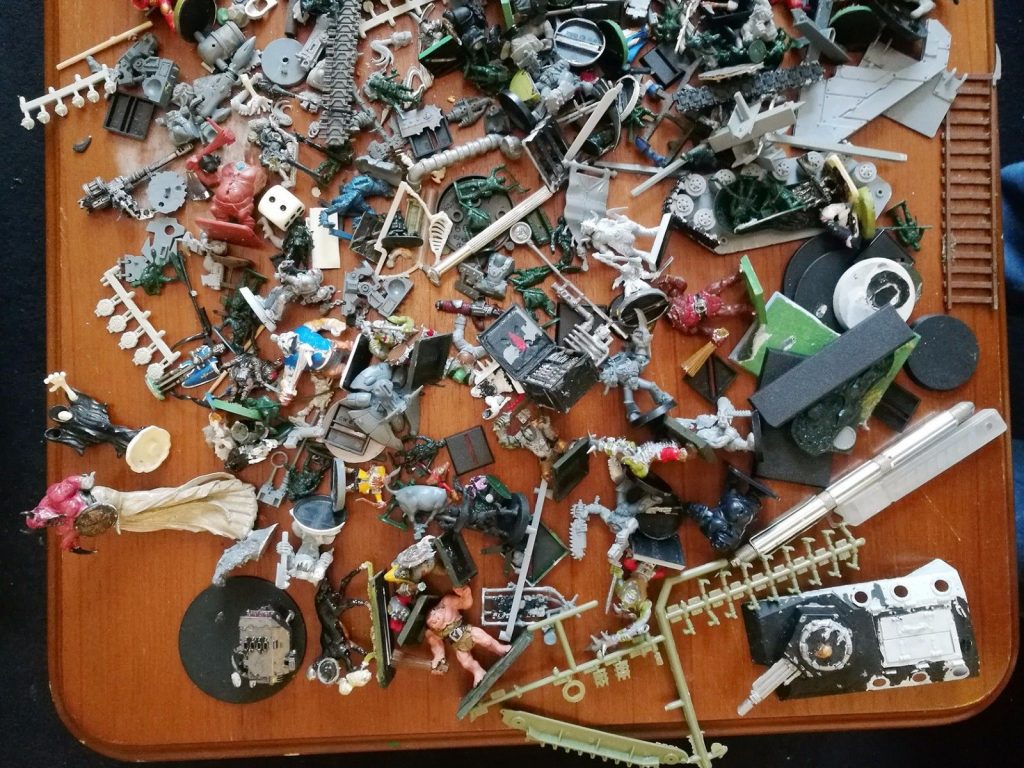 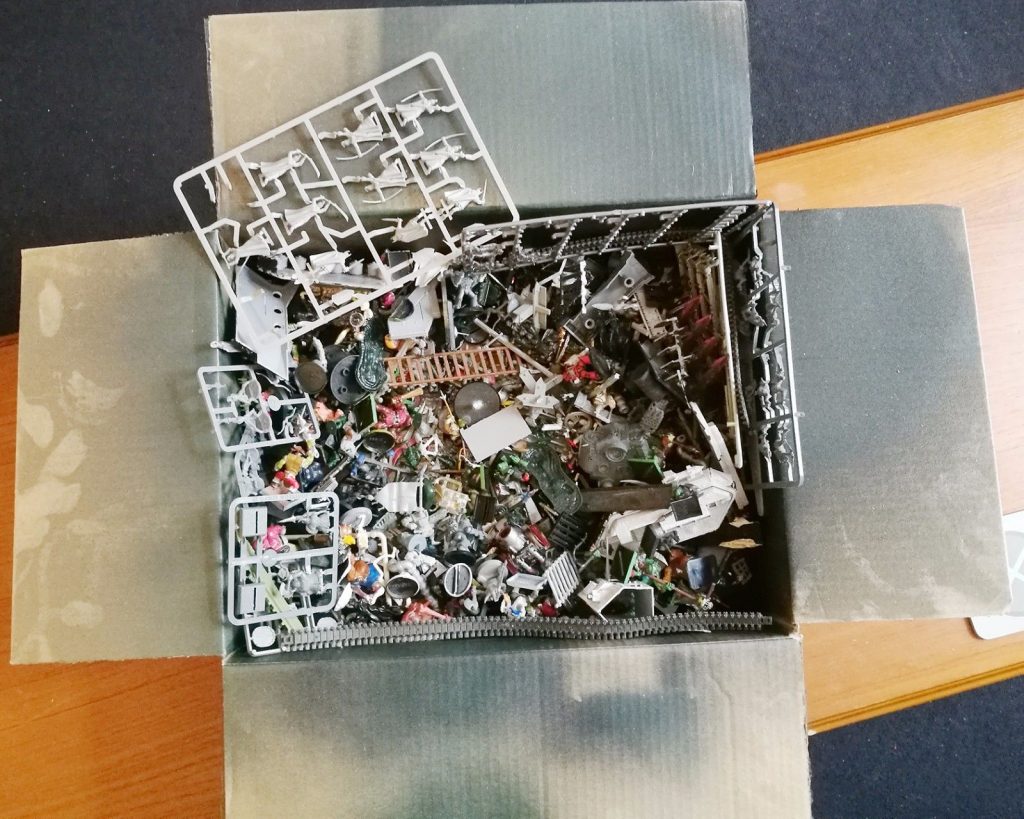