In a previous episode of the Orthesian Herald, we had our band of noble scallywags have their first bad warp jump coincide with their first daemon encounter.

I wanted to make some Ebon Geists – an interesting warp predator from the back of the Rogue Trader core rulebook. They’re not affiliated with any of the four main Chaos gods, so I felt easy throwing them at the party without any of our 40k veterans being able to guess what they were up against. 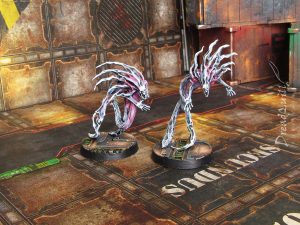 They had a spooky introduction, as the crew were responding to a faulty life support conduit deep in the underdecks of their ship. When the wall of ice from a leaking pipe came to life and shredded an armsman like an egg slice, there was considerable panic. 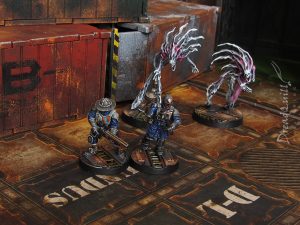 They were assembled from some parts of spirit hosts I had from my bits box, as well as a healthy helping of weird Chaos tentacles and probably a Tyranid bit or two to bulk them out.

They were assembled in an evening with copious amounts of plastic glue, so it didn’t hugely matter if things didn’t line up. 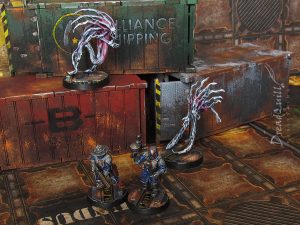 They needed to be painted up super quick, as I was playing on the same day as I finished making them!

A white undercoat followed by a number of different washes did the job. Blue all over, with a black wash towards the extremities and a crimson wash in the centre.

They had a good going-over with a grey-blue drybrush with a very fine drybrush of white at the extremities and they were done! I painted the bases to match my other minis, and the black rim around the edge to tidy them up was still drying as I read the intro to the game. Close call! 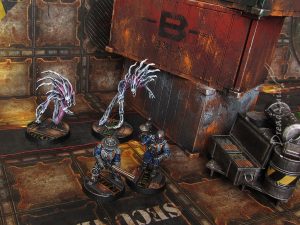 In the game they were quite brutal – a combination of Phase and Warp Weapon meant they could move about quite freely and harass players at the back of the group who thought they’d be away from melee range.

They were the cause of our first limb-loss as well, with one of them pulling our Explorator’s arm clean out of its socket with an unexpectedly deadly strike. 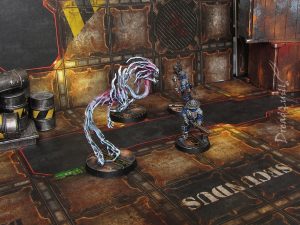 All in all I’m very pleased with how they came out for a few hours of kitbashing and washing – our players got their first taste of the warp and I managed to satiate my GM’s bloodlust for a little longer!

I’ll definitely be making some more of these guys for future though, I don’t think two alone can threaten the party any more… 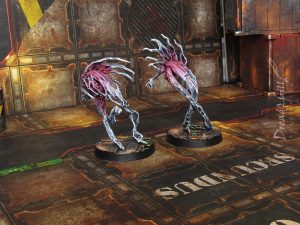 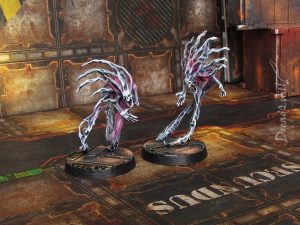 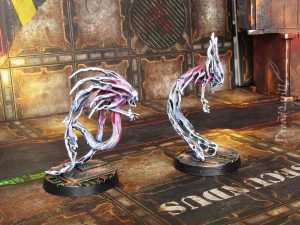 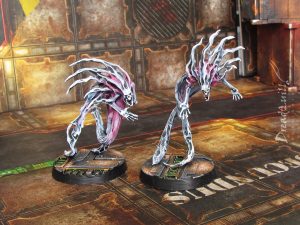 What a turnaroud! Our final week ends with the biggest comeback we’ve seen, with the Calorie Crooks jumping from last to first place in a single evening, guaranteeing themselves a position in the finale.

Apotheosis week has been kind to the Order as well, with their pole position from a successful rescue, shoot-out and downtown dust-up. The Mayhem gang maintained their lead, and the Iron Rovers managed to claw the necessary Rep out of the Inheritors’ weird, clammy hands in the final few games of the Turf War. A 3-way Border Dispute was always going to be messy… 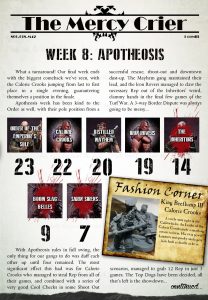 With Apotheosis rules in full swing, the only thing for our gangs to do was duff each other up until four remained. The most significant effect this had was for Calorie Crooks who managed to steal Rep from all their games, and combined with a series of very good Cool checks in some shoot-out scenarios, managed to grab 12 Rep in just 3 games. The Top Dogs have been decided, all that’s left is the showdown… 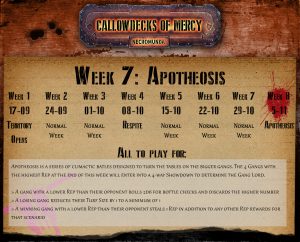 All to play for: Apotheosis is a series of climactic battles designed to turn the tables on the bigger gangs. The 4 Gangs with the highest Rep at the end of this week will enter into a 4-way Showdown to determine the Lord of the Callowdecks. 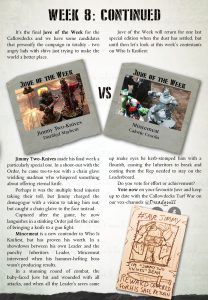 Juve of the week 8

It’s the final Juve of the Week for the Callowdecks and we have some candidates that personify the campaign in totality – two angry lads with shivs just trying to make the world a better place.

Juve of the week will return for one last special edition when the dust has settled, but until then let’s look at this week’s contestants on Who Is Knifiest: 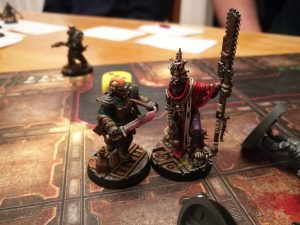 Jim ‘Jimmy Two-Knives’ Bean made his final week a particularly spectacular one. In a shoot-out with the Order, he came toe-to-toe with a chain glaive wielding madman who whispered something about offering eternal knife.

Perhaps it was the multiple head injuries taking their toll, but Jimmy charged the demagogue with a vision to taking him out, but caught a chain glaive to the face instead.

Captured after the game, Jimmy now languishes in a stinking Order jail for the crime of bringing a knife to a gunfight. 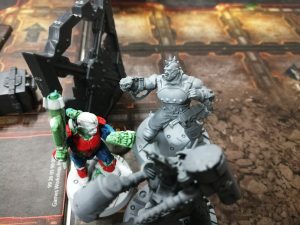 Mincemeat is a new contender to Who Is Knifiest but has proven his worth. In a showdown between his own Leader and the punchy Inheritors Leader, Mincemeat intervened when his hammer-hefting boss wasn’t producing results.

In a stunning round of combat, the baby-faced Juve hit and wounded with all attacks, and when all the Leader’s saves came up snake eyes he kerb-stomped him with a flourish, causing the Inheritors to break and costing them the Rep needed to stay on the Leaderboard.

As always with Juve of the Week – will you vote for effort or for achievement?

The Distilled Mayhem gang are offering a reward for the safe return of this stupid but weirdly endearing Juve who arrived to a shoot out without anything to shoot with.

Or at least we want his knives back.

They were pretty nice knives.” 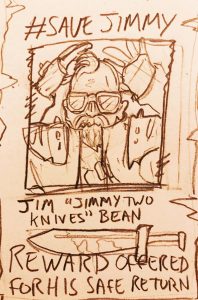 The Order of the Emperor’s Sole have released a statement:

“To all heathens and false-claimers of the Callowdecks, the scoundrel and drunkard known as Jimmy “Two Knives” was recovered from the field of glorious battle. Even though the heathen reeked of Amasec he has been granted mercy by my own blessed hand, as even though he was clearly out matched, unskilled and unworthy to fight the Emperor’s chosen sons, he did engage in pure, glorious and divine melee combat and for this his wounds were treated and he has been given “food” and shelter. For a suitable donation, the Order under my blessed command will make sure this man returns to his “family” healthy and in one piece. Do not dally however, the Emperor’s mercy does not last long”

Rumour in the underdecks is the going rate for Jimmy Two-Knives is 80 Credits – will Distilled Mayhem pay the ransom in time for the showdown?

A rarely-seen sight in the Callowdecks, the Leader of the Calorie Crooks made a smashing return to form. His twin power hammers and spooky smile make him look as deadly as he is. 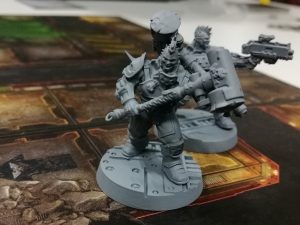 Fighting was bitter, and we saw several shoot-outs, a downtown dust-up, a game played entirely in the dark and a three-way Border Dispute that lasted almost five hours!

The fighting was harsh as everyone battled for a chance at the coveted title of Lord of the Callowdecks.

In the dark – calorie crooks vs the inheritors

Shoot out – Distilled Mayhem vs The Order

Two down! Blackstar Hunters have officially retired this week due to commitments elsewhere and the Dreadquill House Gang 16th Law have stepped down. It would be difficult arbitrating the finale if the Arbitrator also had a horse in the race.

This is also the penultimate week before Apotheosis, so the gangs were dropped hints about what was to come. The finale will be an epic multi-brawl between the top four (!) gangs, no-holds barred, last-gang-standing fight to the end.

There is everything to play for to get into the top four gangs! 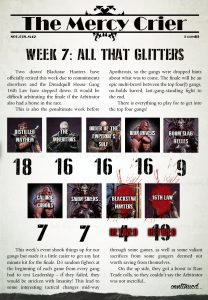 This week’s event shook things up for our gang but made it a little easier to get any last minute kit for the finale. D3 random fighters at the beginning of each game from every gang had to test Leadership – if they failed, they would be stricken with Insanity! This lead to some interesting tactical changes mid-way through some games, as well as some valiant sacrifices from some gangers deemed not worth saving from themselves.

On the up side, they got a boost to Rare Trade rolls, so they couldn’t say the Arbitrator was not merciful… 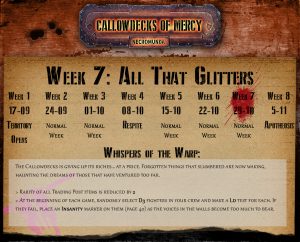 Whispers of the warp: The Callowdecks is giving up its riches… at a price. Forgotten things that slumbered are now waking, haunting the dreams of those that have ventured too far. 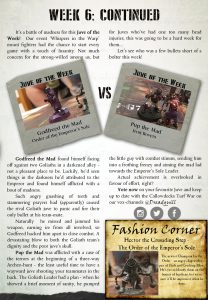 week 7 juve of the week

It’s a battle of madness for this Juve of the Week! Our event ‘Whispers in the Warp’ meant fighters had the chance to start every game with a touch of Insanity. Not much concern for the strong-willed among us, but for Juves who’ve had one too many head injuries, this was going to be a hard week for them…

Let’s see who was a few bullets short of a bolter this week! 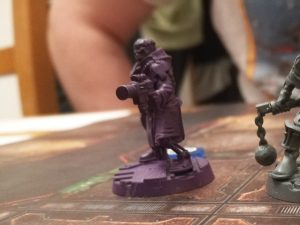 Godfreed the Mad found himself facing off against two Goliaths in a darkened alley – not a pleasant place to be. Luckily, he’d seen things in the darkness he’d attributed to the Emperor and found himself afflicted with a bout of madness.

Such angry gnashing of teeth and stammering prayers had (apparently) caused the rival Goliath juve to panic and fire their only bullet at his team-mate.

Naturally he missed and jammed his weapon, earning ire from all those involved, so Godfreed hacked him apart in close combat. A devastating blow to both the Goliath team’s dignity and the poor juve’s skull. 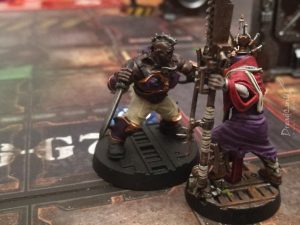 Pup the Mad was afflicted with a case of the terrors at the beginning of a three-way Archeo-hunt – the least useful time to have a wayward juve shooting your team-mates in the back.

The Goliath Leader had a plan – when he showed a brief moment of sanity, he pumped the little guy with combat stimms, sending him into a frothing frenzy and aiming the mad lad towards the Emperor’s Sole Leader.

Actual achievement is overlooked in favour of effort, right?

The newest Champion for the Order (and the longest title of any ganger to date) – an angry chap with a pair of flails and Crushing Blow. He’s yet to bloody them on the bonces of heathens, but we’re sure it’ll be impressive when he does. 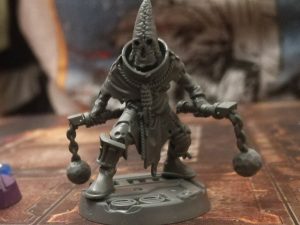 Lots of gangers got very high on Spook including the Sarin Siren Juve ‘Rimes’ who became convinced that she was the living embodiment of the Emperor somewhere between her third and fourth huff of that sweet, sweet powder.

Eventually ‘Turner’ took one sniff too much and she had to be put down by a quick hose of Cassidy’s chem thrower. So that’s yet another death for the Sirens to mourn.

With the purchase of a new ganger to replace Turner, the sirens are right back to square one except for the rep they have picked up!

Shoot out – Iron Rovers vs The Order