The station-complex of Mercy holds many secrets, accommodates many factions and houses many attractions to the denizens of the Nomad Stars. One such attraction is the infamous Bazaar Arenas, home to all manner of blood sports and high-octane races round its treacherous circuits.

In addition to xenos-beasts, execution victims and gangers trying to prove their worth, the arena fights are dominated by merciless Chrono-gladiators of the Death Clocks guild – cybernetic pit fighters with implanted weapons, vat-enhanced muscles and injectors filled with cocktails of lethal combat drugs. All have a death switch installed – a ticking time bomb attached to the heart that is only set back by the act of slaughter.

For a Chrono-gladiator, death is life. 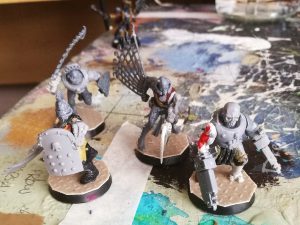 With an imminent new Rogue Trader game starting up, and a number of games already set on Mercy, I wanted to assemble some members of the notorious Death Clocks guild. Partly to swell the numbers of interesting villains to throw at parties when they go dredging through Mercy, partly because I wanted an excuse to make some super-weird kit bashes.

I didn’t have any goal in mind other than to make half a dozen Chrono-gladiators with unique weapon sets that both highlight their martial prowess and their penchant for style over substance. They’re deadly killers for show, but what use are your showmen if they’re too good at killing?

I also had a strict ‘no new parts’ rule (which I think I’m going to need to start enforcing a LOT more in the new year…), so everything was assembled from bits I already had lying around in my box. 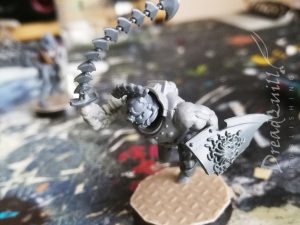 I had quite a few Dark Eldar weapons kicking about from boxes of Warriors and Wyches from assembling my Blood Bowl team, many of them looking suitably bizarre, gladiatorial or downright nasty – perfect for a bunch of cyber-goons.

This first chap was assembled with Wych legs, an old school Space Marine torso, an Ork left arm, a Dark Elf shield and a long chain-whip-sword-flail thing from the Wych box set. It was all finished off with a Skitarii captain’s head to give it a lovely tech-feel. 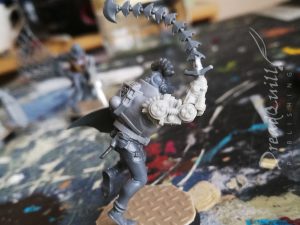 The bionic arm is actually a bionic leg from Anvil Industry. The current pack I bought is at time of writing no longer available, it seems they are undergoing a bunch of revamps to their old stock. Exciting news! There’s definitely going to be an order put in again next year.

This guy needs some filler work, and some small odds and ends to blend the parts together, but overall I’m pretty happy with how he turned out. 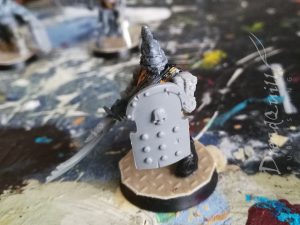 This guy was very much an exercise in answering the age-old bits-box-rummaging question; “What the hell can I use *this* part for?”. I had a collection of Khemri bits from Emperor-knows-where and have been looking for an excuse to use them for some time now. I’m a big fan of their Egyptian aesthetic, and find it suspicious that they’ve dropped off the Age of Sigmar radar entirely… 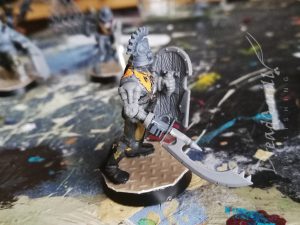 The body and legs were from a plastic Chaos marauder, bionic arms and legs from the Anvil bionics pack again, and a head from a Skitarii. I love how the power khopesh came out, and I think he’s a firm favourite. A bit of blending work to be done, but considerably less than the first chap. 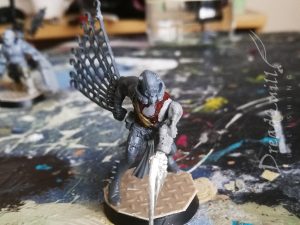 This bundle of joy is perhaps my favourite pose, using a hooked net from the Wych box set and an original metal Necron Flayed One hand (or it might be from a Necron Lord, not sure…). The legs are from the Wych set again, with a Catachan body and another Skitarii head. 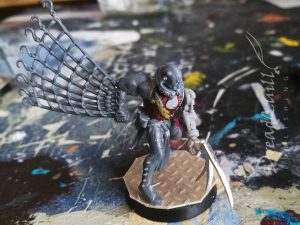 I’m looking forward to releasing this guy on my players the most, as a combination of a stunning, entangling net and poisoned armour-piercing claws sounds like a truly horrifying combination for any poor sod who gets in its way. 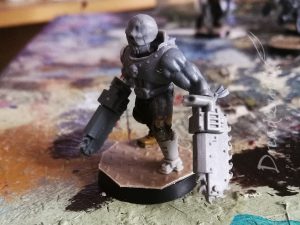 For the last angryboi in this batch I wanted something a little less dynamic, a little less subtle. Sometimes you just need a guy with a skull for a head and chainsaws for hands, y’know? 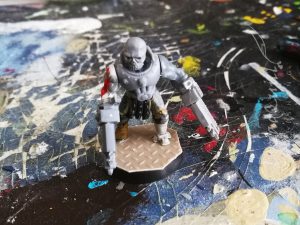 There’s nothing particularly exotic about this build – Space Marine torso, Ork arms and snipped-down Ork choppas for hands, Chaos Marauder legs, an Anvil bionic foot and the skull is from a banner topper. 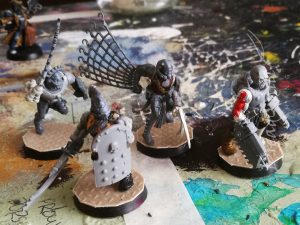 I like how they all came out, and despite the varying appearances I think they will work well by themselves or as a group. We’ve already had a trial game with the Khemri shield and he was suitably brutal, so I’m looking forward to tidying these guys up and adding them to the painting queue. 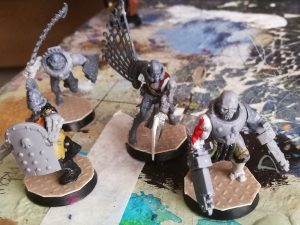