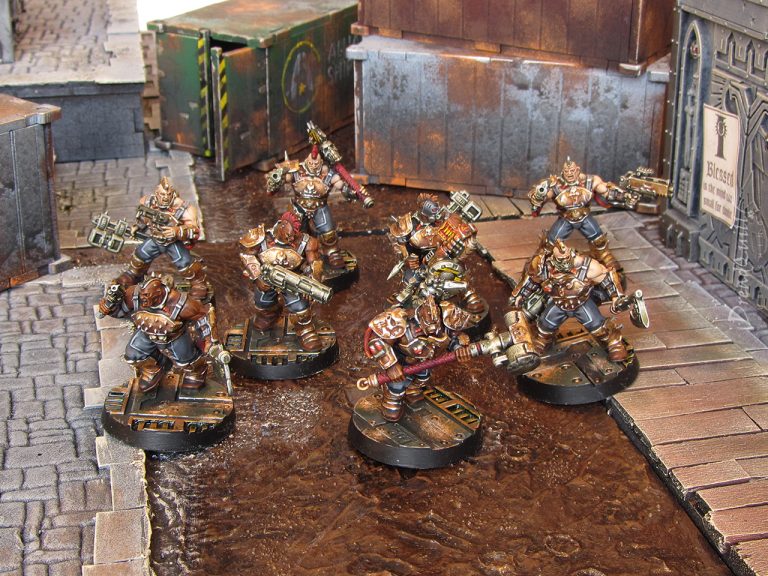 I’ve had a lot of fun painting these guys. Normally, muscle-bound knuckle-draggers aren’t my jam – I swerve from barbarians and fighter-types in any roleplaying game – so I didn’t think the Goliaths from Necromunda would appeal to me.

Boy was I wrong.

I got the Necromunda set for Christmas and I had such a great time assembling the two gangs that I couldn’t wait to get stuck in to the painting. I knew I wanted them to be multi-role, usable both in  Necromunda and as goons for our games of Dark Heresy or Rogue Trader.

The Longshore Brassnecks were the result – beefy gangers who show off their prowess by hauling cargo around without the need for lifting equipment, and running security for the point defense guns of Mercy. I liked the idea that they made their furnace plate armour out of spent shell casings from macrocannons (if there is such a thing…), so the armour would be painted to look like battered copper.

I think they came out rather well, and I left two models back for the inevitable campaign amendments or new recruits. As much as I’d LOVE to buy another box set of these guys, holding two back for spares seemed like the more prudent idea. Plus, I fancied trying my hand at a lady Goliath, but that’s a project for another time… 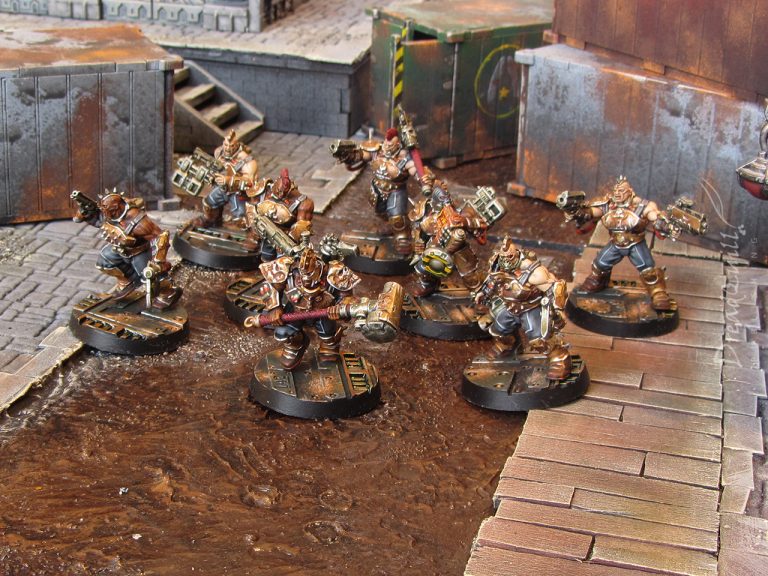 First up is the leader, Musgrave. He’s armed with a power hammer, stub cannon and a fighting knife for those delicious extra dice in combat. Sure you have to split your attacks between the weapons this way, but I reasoned it was better to roll more dice at a problem and increase my chances of hitting with the hammer in the first place.

I picked the bulkiest armour, head and shoulder pads for him too so that he would stand out, and slung a stub cannon on his back to make use of that 3+ Ballistic Skill. I did a little conversion work on the power hammer too, swapping the head for the Renderizer gave it the heft I was looking for. 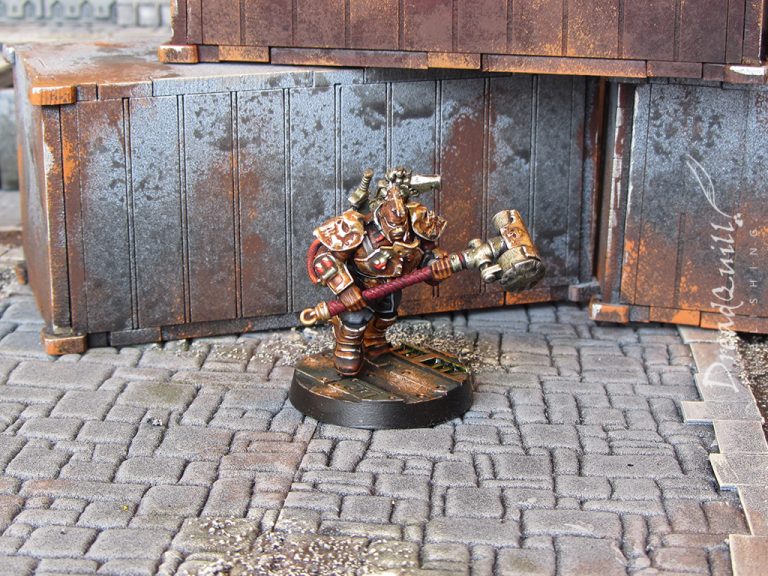 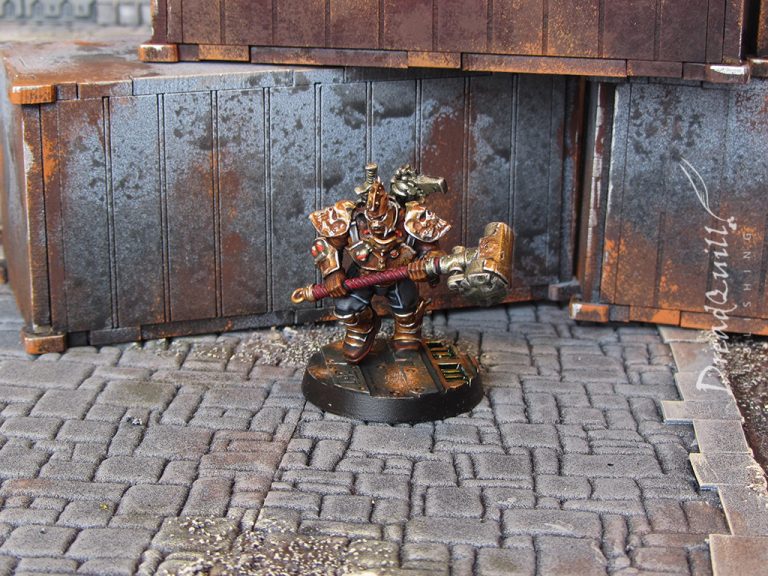 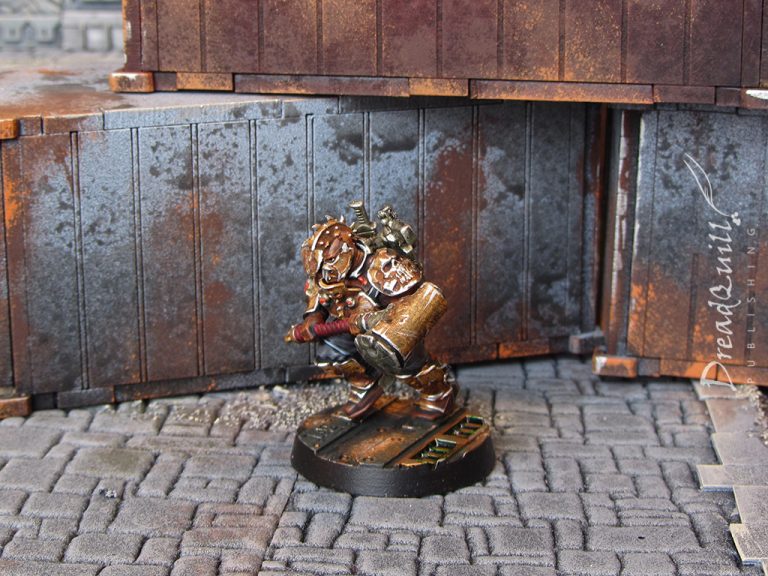 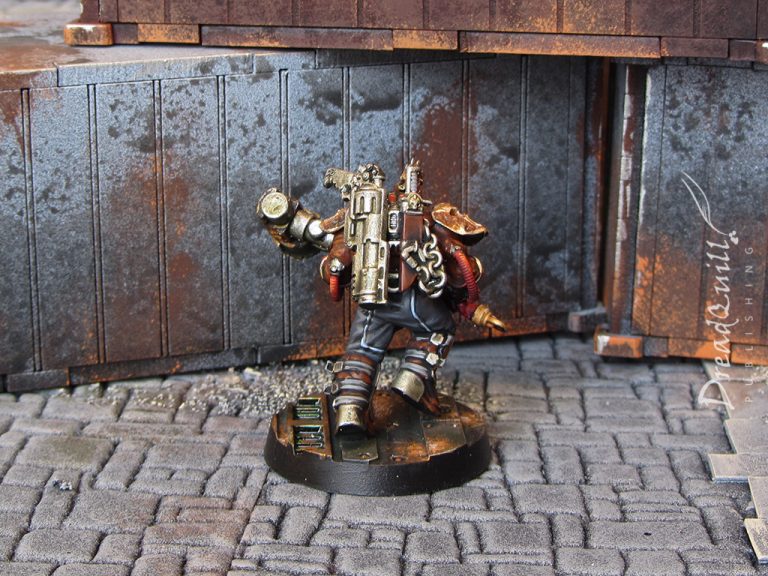 Next is Zastava, a Juve armed with a stub pistol and a spud jacker. As one of two Juves in the gang, his job is very simple – run around and be generally irritating.

He originally had a knife rather than a pistol, but there were so many moments in our test games when he found himself behind cover not able to do very much. Even with a 5+ Ballistic Skill it’s better than nothing, and opens up his tactical options a little bit. I’d rather get one shot at 5+ than no shots at all.

The pistol is from Zinge Industries, as the core Goliath box set sees fit to only furnish you with two stub pistols… 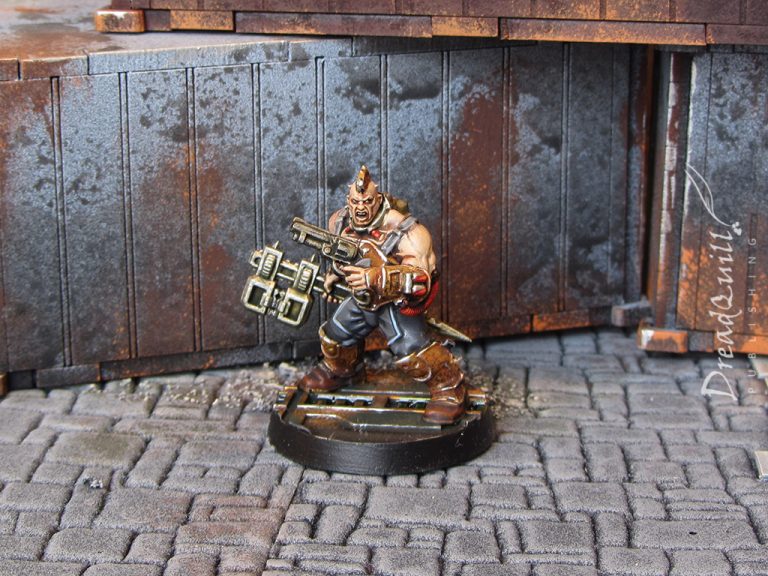 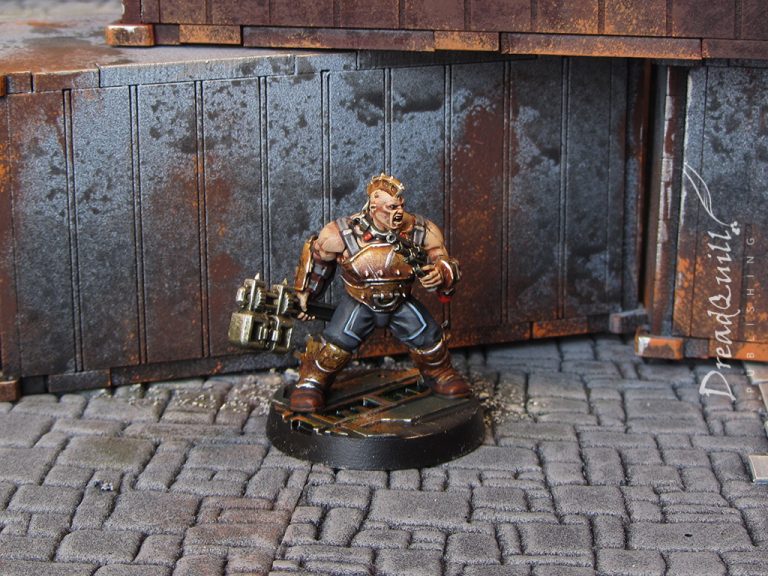 The other Juve is Gat, wielding a brute cleaver rather than a spudjacker but his role in the gang is still the same as Zastava’s. His stub pistol is from Zinge again. 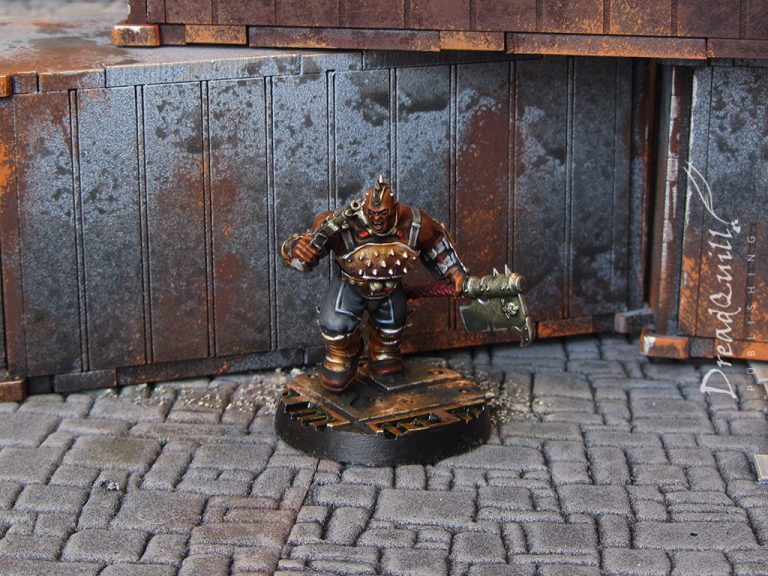 Next up is Roth, armed with a Renderizer and a stub pistol. He had a little conversion work done to him too – swapping the head round with Musgrave’s power hammer so it’s slung over the shoulder instead of wielded two handed. The pistol had to be swapped round with the combi-plasma pistol arm too.

Considering the work that went into him, he’s not actually played in any games yet, he tends to get left on the sideline. Poor Roth. 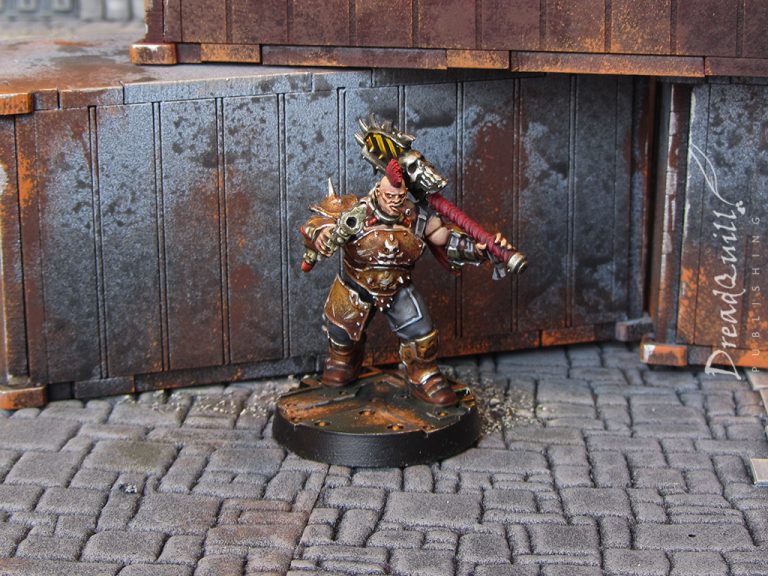 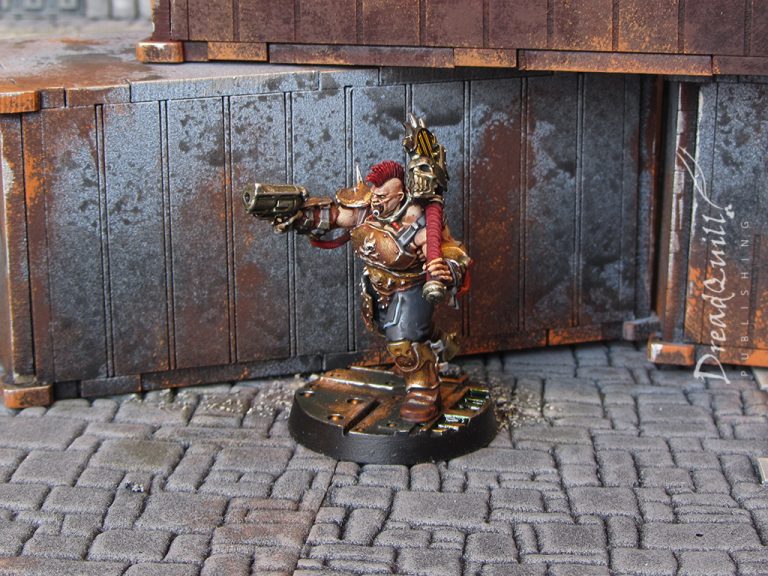 Next up is my boy Sturm, the Champion of the Brassnecks and very dear to my heart. I’m not sure why the rivet cannon gets such a bad rap among the community, it’s been a pleasant surprise in every game we’ve played so far. Granted, the 9″ range can totally hamstring your plans, but Sturm is a Champion armed with a spud-jacker – he’s got two Strength 5 WS 3+ attacks he can throw out if you think charging him is a good idea.

Opponents tend to underestimate the Goliath ‘heavies’ into thinking that just because they have a heavy weapon they’ll be a pushover in close combat – something Sturm has used to his advantage more than once.

Attaching the spud-jacker was easy enough – the hand that was holding it was carved away with a craft knife. I tried my hand at a bit of object source lighting on the rivet cannon and although I’m not super pleased with how it came out, I’m glad I tried it! 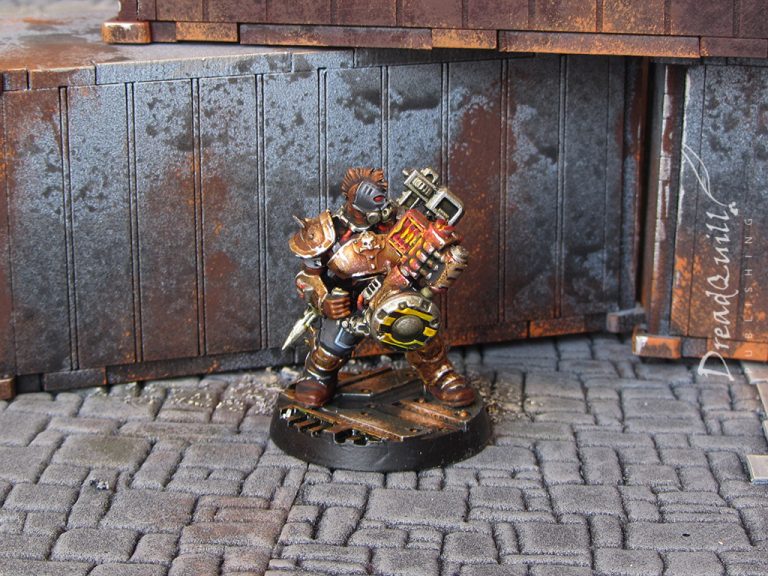 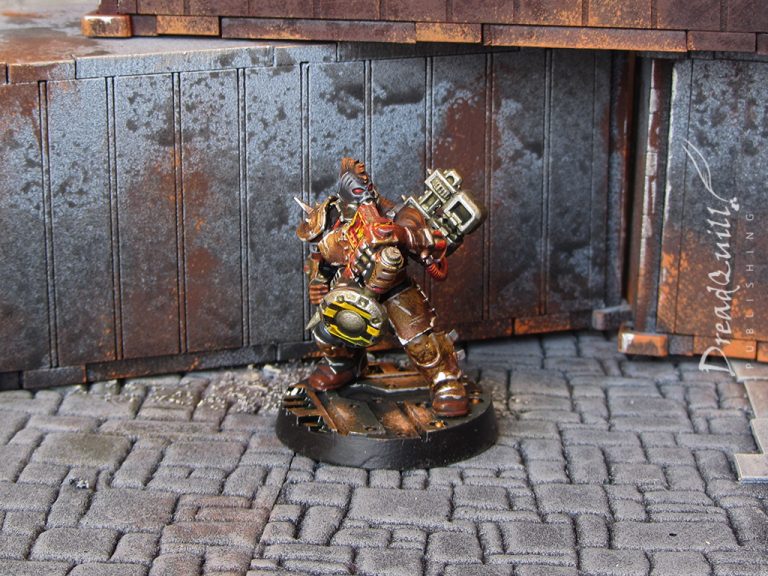 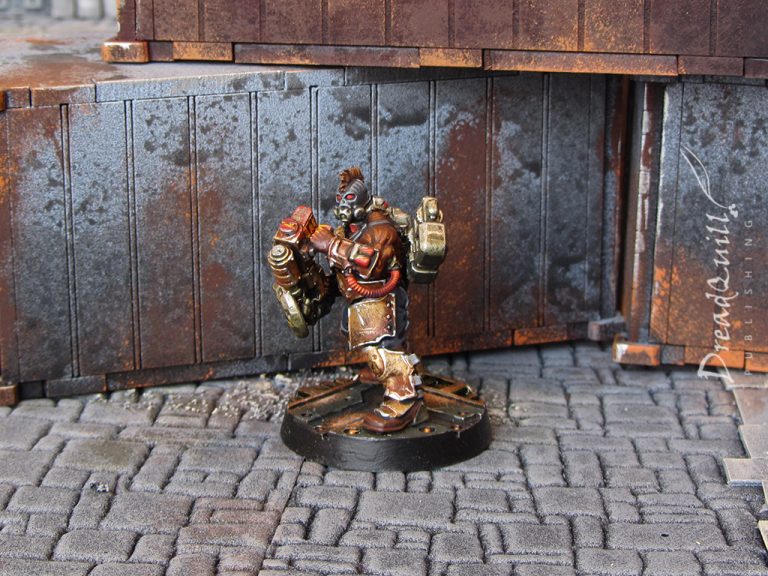 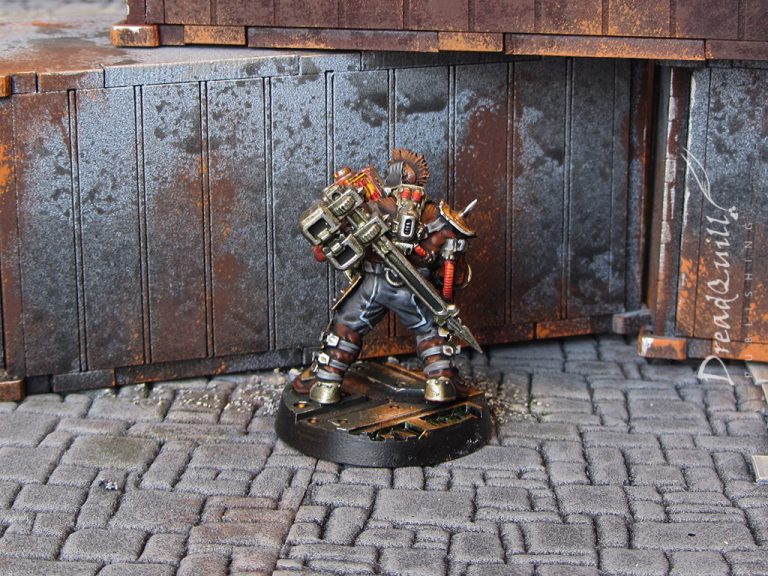 This is Vektor, the cheekiest of the Brassnecks, known for his tendencies to pull off trick shots with his grenade launcher or bounce missed shots round corners much to the frustration of opponents.

He comes with an axe and stub gun too (in a holster on his back), as we’ve played enough original Necromunda to know the importance of a backup weapon if you’re the heavy. 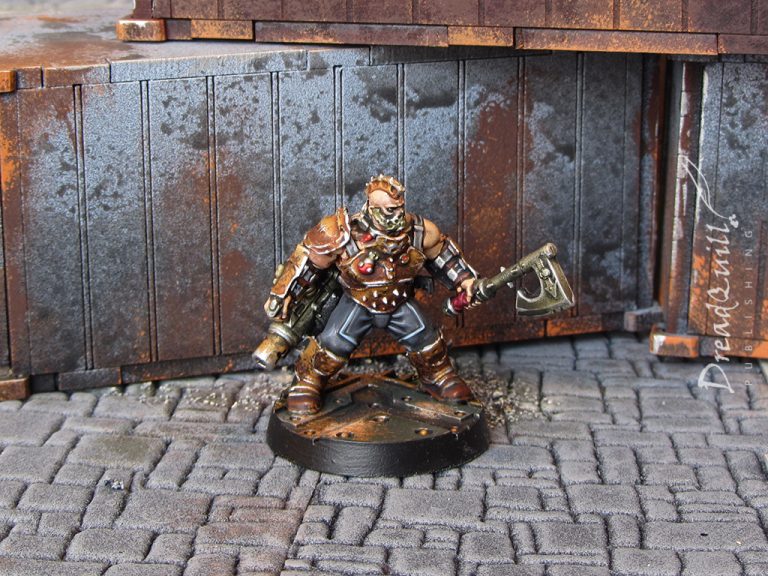 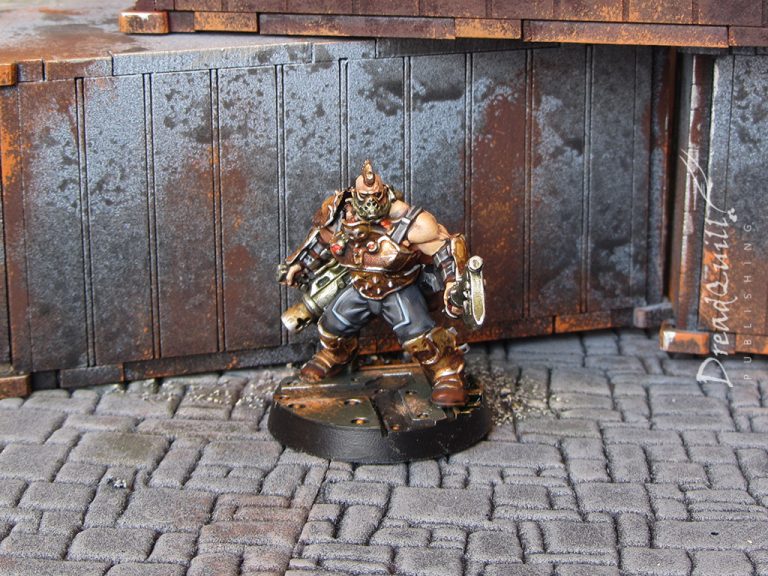 Up next is the dark horse, Pounder. When we were making the gangs as a group, we didn’t really know how silly the combat shotguns were until one of did a double-take on the character sheet halfway through the test game and pulled out the flamer template.

He’s great for in support for keeping a whole bunch of people pinned, and every now and then one of those Strength 2 shredder shots actually does something! 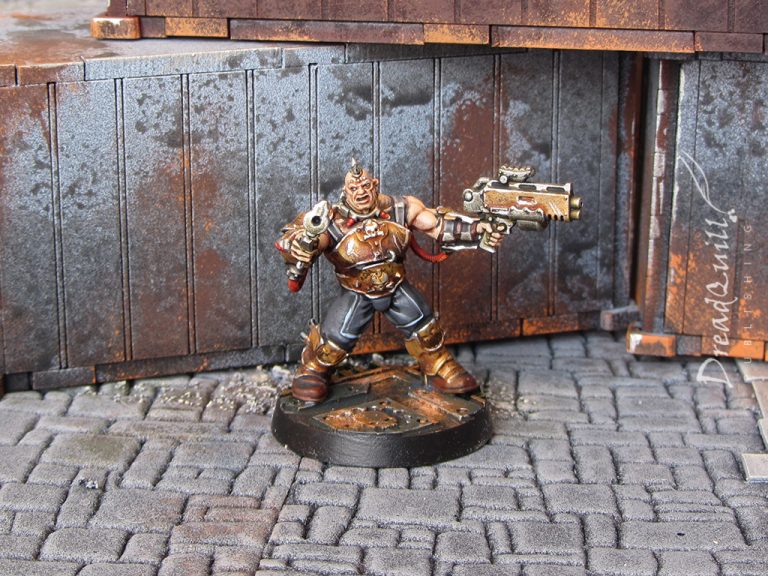 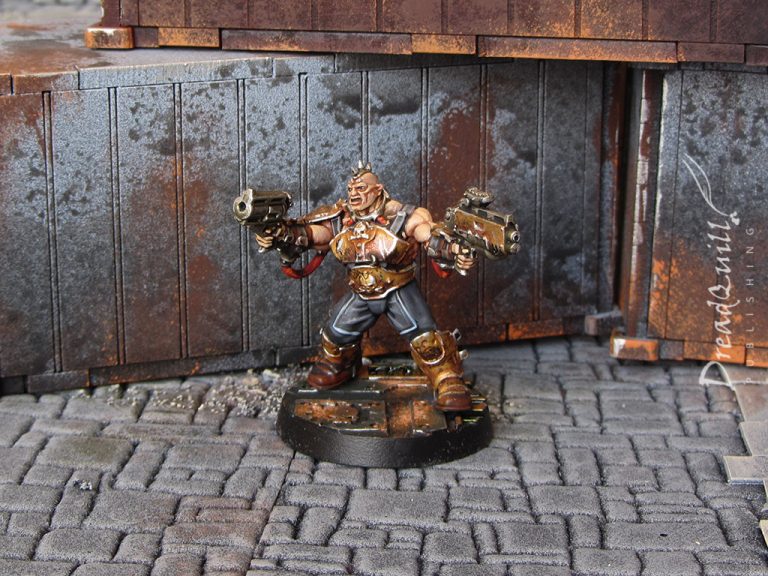 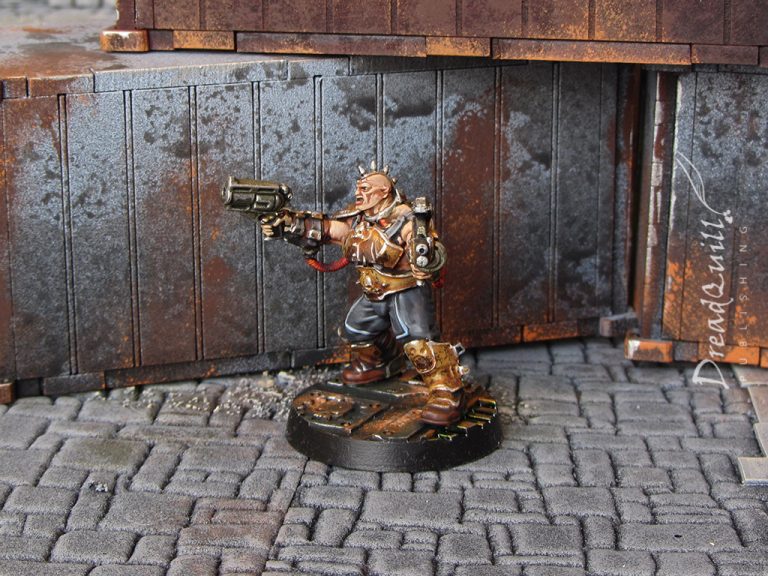 Finally we have Ruger, a humble support ganger with a stub cannon and fighting knife. The theme for this gang was BIG GUNS, as my aforementioned aversion to muscly brutes hitting stuff meant I decided to take them in a different direction. Their job was to haul big munitions to use in even bigger guns, so it was only reasonable they took a liking to big guns themselves.

After running a game or two, I’ve realised just quite *how* much I like the stub cannon, and there will be several more gangers being equipped with them after this! 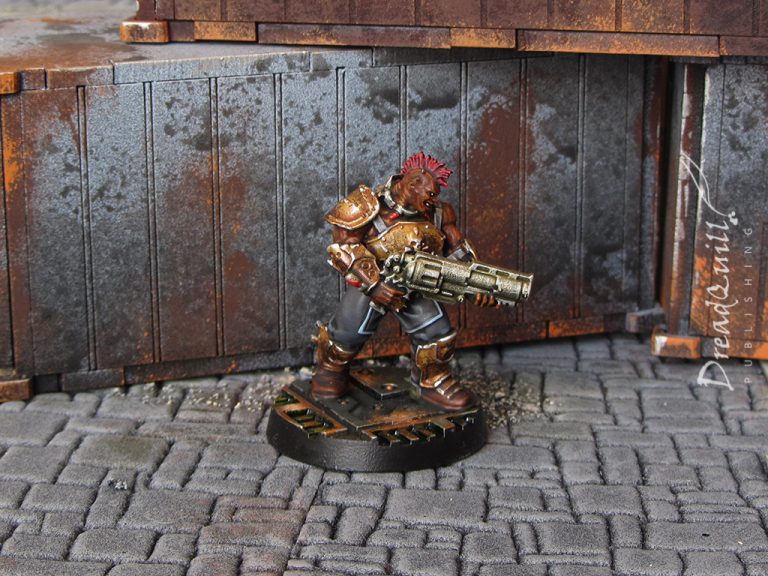 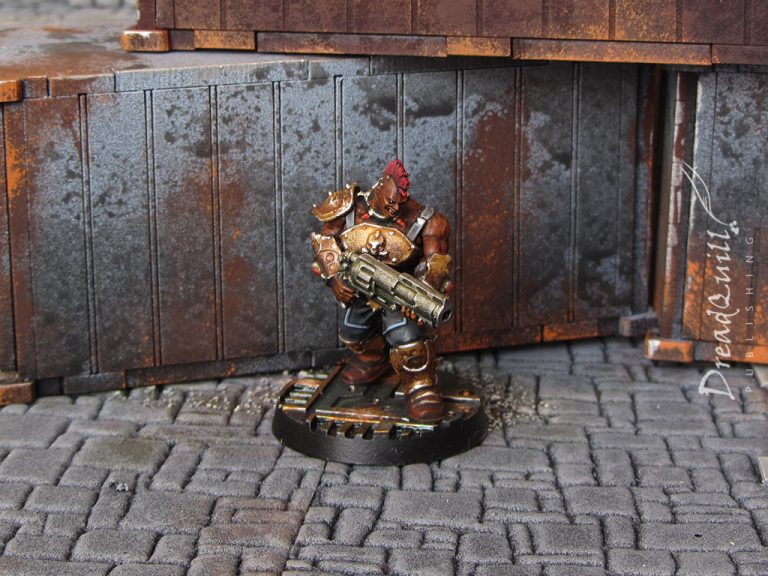 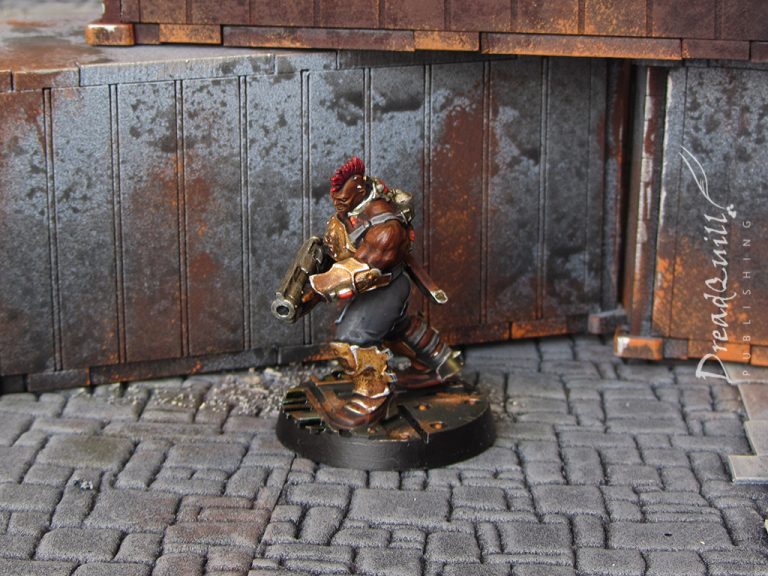