A rare Inquisitor update for this week’s MOTB; Conan “The Unkillable” – an ex-hive ganger turned mercenary and bodyguard for powerful people the Inquisition have interests in. 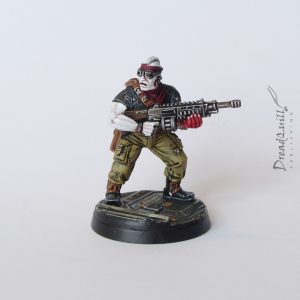 Conan started out life as most of my projects do – a pile of parts loosely assembled because I liked the pose, flow or combination, and then left in a tray or bits box for several orbits of the sun because it was missing the Final Piece that brought the model together.

A while ago I began porting some scum and villainy over from our Necromunda, Dark Heresy and Rogue Trader sessions – there are plenty of colourful, interesting gangs and organisations that we play with at 28mm, so why not try and bring them to 54mm?

TJ Razor was the first, a member of the Pursers Grim, and then I wanted to bring over a member of the notorious Red Hand Gang – a ubiquitous Orlock gang that originated in our games of Necromunda and appeared in Dark Heresy and Rogue Trader ever since as the go-to miscreants.

The Red Hand Gang tattoo their left hand red as part of their initiation, and get subsequent stripes up their arm for every confirmed kill. This was the only brief – the character needed a red hand. 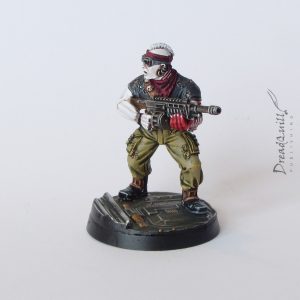 I like my bangsticks in Inquisitor, and with the creation of the Revised Armoury a few years back by the Inquisitor Community, they became a lot more varied and a LOT more deadly. I wanted to experiment with a character that ‘just’ had a rifle of some kind – I needed more regular mooks, but with a little suttin’ suttin’ that sets them apart from the regular rank and file.

The weapon came from a burst of inspiration when trawling the Anvil Industries website for one of any dozen other projects and found the perfect rifle. I already knew the scale would work fine from previous experiments with Anvil’s line of Exo-Lord scale weapons, and all the spare parts would make choosing the right gun for the job much easier. I know from experience that a dedicated sniper character in Inquisitor is boring to play both with and against, so although this guy was going to be a ranged support character, he was going to have a little bite to him with some fully automatic shootybangs.

Putting him together was simple enough – he is pretty much a straight lift of the Talon Hive Ganger expansion with different legs. Try as I might, I couldn’t find anything else interesting to stick to the model except a backup pistol, he didn’t look right travelling heavy. I reasoned he’s got some brass knuckles in a pocket somewhere that would do in a pinch.

I knew from the get-go I wanted my 54mm gangers to be a league apart from their 28mm brethren, each having a certain trait that helps them play with the Big Boys. I wanted to have a ganger with the Regeneration trait, and after watching THAT scene from Luke Cage, I knew what had to be done. The pin vice came out and holes were drilled everywhere, touched up with some putty to make them look like bullet holes. 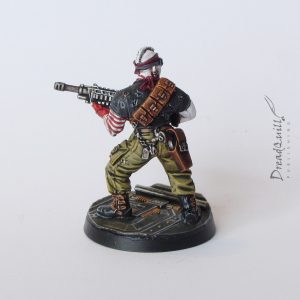 When it came to painting, I already had the colour scheme pretty set in my head – I had over a dozen members of the Red Hand Gang to fall back on with khaki green trousers and dark grey clothes – lots of lovely neutral tones to help offset the gang colours and make those red hands really pop.

For a skin tone I wanted a very pasty colour – for someone who spends their entire life away from the sun, they would never have developed much of a tan. I had also re-watched one of the Riddick films recently, and with the goggles Conan was wearing, I could really resist going one step further. 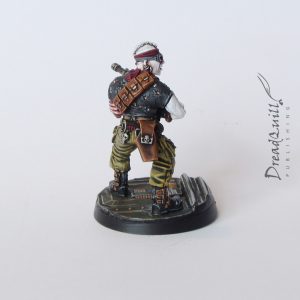 Good grief I hate painting white. This was doubly awful because I have the super-thick foundation white from Games Workshop, which is excellent when you want to paint over a dark colour (which is basically always) but the worst thing when you want to do a bunch of really really thin layers.

I called it quits after maybe the 20th or so watered-down layer of white – it wasn’t going to get any better than it was. I wasn’t a fan of the really chalky texture the skin had picked up by this point, but you’d have to drag me to my table kicking and screaming if you wanted me to strip him and do it again. F that N. 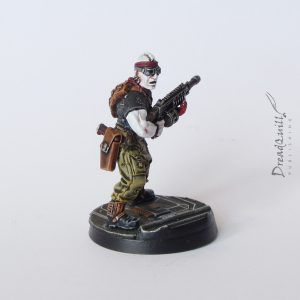 The base was finished off in much the same way as TJ – assembled from bits of weird sci-fi scrap from the rather excellent Chemical Plant box set and painted in drab colours to look like a forgotten section of space station deep in the bowels of Mercy.

And that was him finished! All that was needed was to draft up a character sheet for him including his heavy caliber autogun, regeneration and discomfort in bright lights and Conan the Unkillable was ready to hit the tabletop. 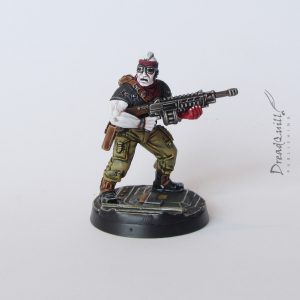 Conan got his first outing (admittedly only in a half-painted state) in a battle report “The Asus Prime Kidnapping”.