As our Orthesian Rogue Trader game gathers momentum, my eyes have been cast to counterparts of our seemingly unstoppable group of Explorers.

Where many of our players already have personal rivalries, either due to their backstories or in-game run-ins that have developed into feuds, none of them will have the same resources as a full-blown rival Rogue Trader Dynasty – House Patroneus.

A few weeks back I found myself dry-fitting odd parts of my bits box that didn’t have any other home – half a Commissar Gaunt, the overcoat from the Scions box set, that sort of thing. House Patroneus had already been established as rivals in name only by this point, why not add some flesh to those bones?

The characters began to form as the models did. This MOTB is looking at the first to be painted, Lord-Militant Assamar Hyde, but the rest of the Patroneus crew is here.

Each will get their own MOTB in turn, but this should serve as an appetite-whetter. I may add a few more in turn, as currently they are outnumbered by player characters anyway. Perhaps Lady Ash might find her way onto the crew… we shall see!

As you can see from the WIP shots, this guy really was cobbled together from random parts I found. I still had a bunch of part-painted Cadians from the Box o’ Bits and I found one with no hands or head who would serve as my shop mannequin. 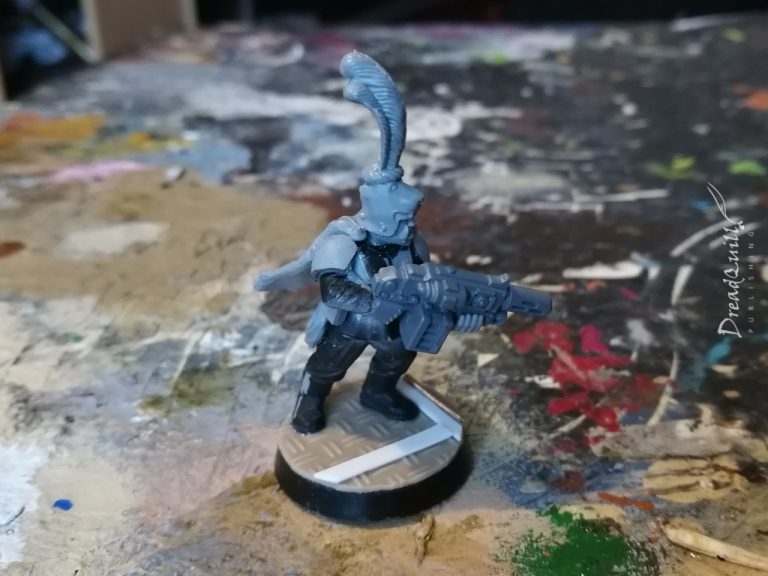 I have lots of esoteric guns in my bits box, and when my internal brief is “The Gary Oak to our Arch-Militant”, it didn’t take me long to fish out a weapon.

This combi-melta is from some Space Marine kit (Blood Angels maybe?) and still had the hands attached. I suffer from a chronic lack of shootin’ hands (for this very reason) but rather than go rooting around for some poor schmuck to liberate a pair of hands from, I thought I would stick with the Astartes hands. It gave him this cool Iron Man vibe that made him seem real fancy. 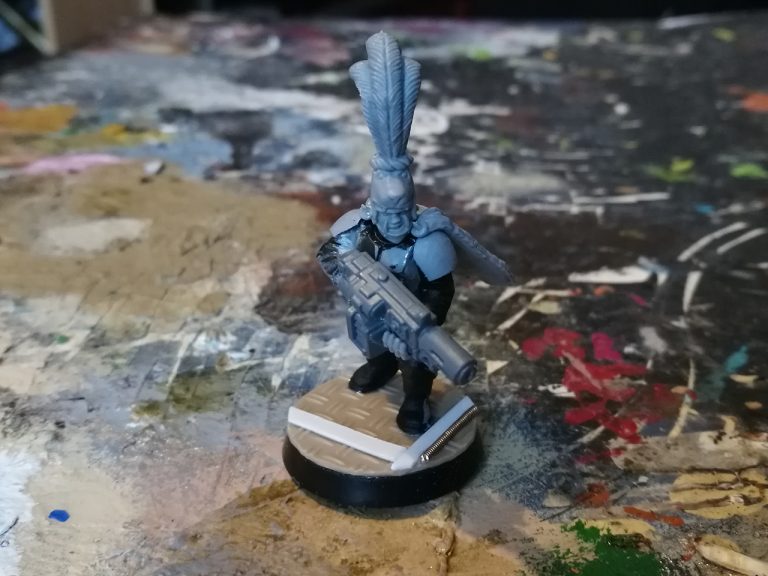 The head was probably the hardest part to choose, as I have SO MANY cool heads that fit the 40k universe. Lots of old-school Warhammer Empire and Bretonnian heads always fit the bill, and I pulled out one with the fanciest plumage I could find.

He was starting to feel more and more like The Hound as a character, and this particular head nailed the aesthetic I was grasping at. 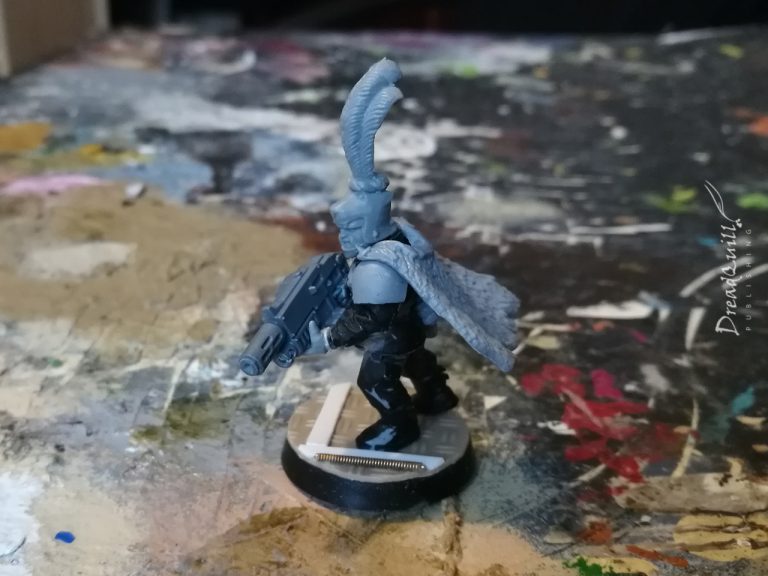 He needed accessories, but I didn’t want to go overboard. He could have had a fancy power sword or a big axe but that didn’t feel right. I settled on a few grenades and a whip that I decided would be some kind of vicious shock whip that he’d save for mutineers and traitors.

A great big animal cape (that I had immediately decided to try and paint some freehand wild animal patterns on FOR SOME HORRIBLE REASON) indicated he was a man of the stars and a trophy hunter. It balanced the model out quite nicely too, as with the massive gun it was starting to be very forward-heavy.

I had three colour techniques I wanted to incorporate in the model somehow. First was colonial British uniforms – very vibrant colours with white trim. Next was a deep brass colour I had found on t’internets that involved two (?!) washes over a metallic brass. Finally was some kind of freehand on the cape, which I’m still not sure why I thought would be a good idea.

It was quite a broad colour palette, and using three kinds of metallics on the same colour scheme can be quite tricky not to make it look gaudy. Luckily, gaudy was what I was going for here, and after all the washes were applied over the base colours, I was very happy with how it had turned out.

One of the great things about doing these weird kitbashes is I get to utilise colours and techniques I wouldn’t normally experiment with if I was building something to a brief or commission. 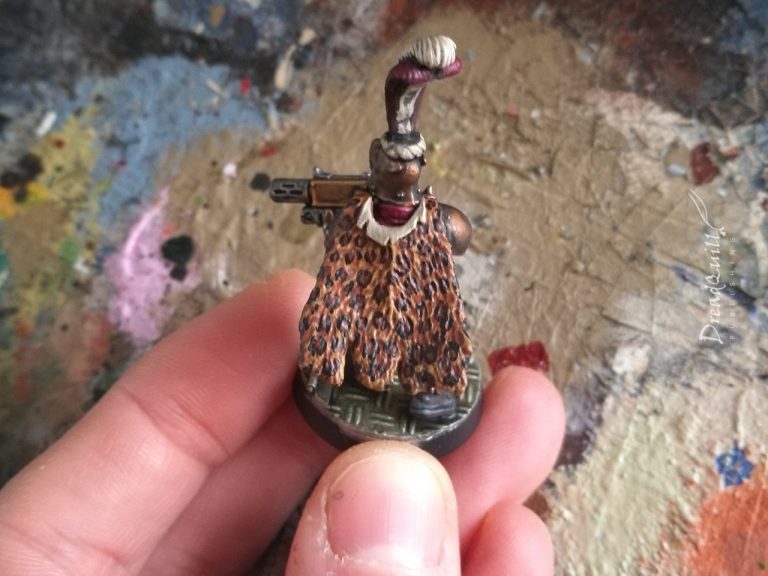 Then the tricky part. With references in-hand, I set about attempting a leopard-print pattern and was pleasantly surprised with how simple it was to do and how effective the technique turned out to be!

First I painted the cape an orangey-brown, giving it a brown wash and highlighting it back up again with a lighter brown to bring out the fur texture.

Then I splodged a dark brown on using an old brush that doesn’t hold its point much any more. They were arranged roughly symmetrically, but it didn’t hugely matter.

When that was done, I painted little black brackets round each brown dot, trying to leave a bit of gap and ensure some variance in line thickness.

What this meant was the quicker and lazier I painted my brackets, the better it turned out. This is my kinda freehand.

With everything in place, it was just a case of painting on my highlights and picking out smaller details and it was done!

And he was completed! A great mini to assemble and I really enjoyed painting him. Expect to see the rest of his crew on MOTB in the coming weeks, and I think I’ll be starting a new Irregulars segment with some of the stat lines for these guys too but for now, watch this space… 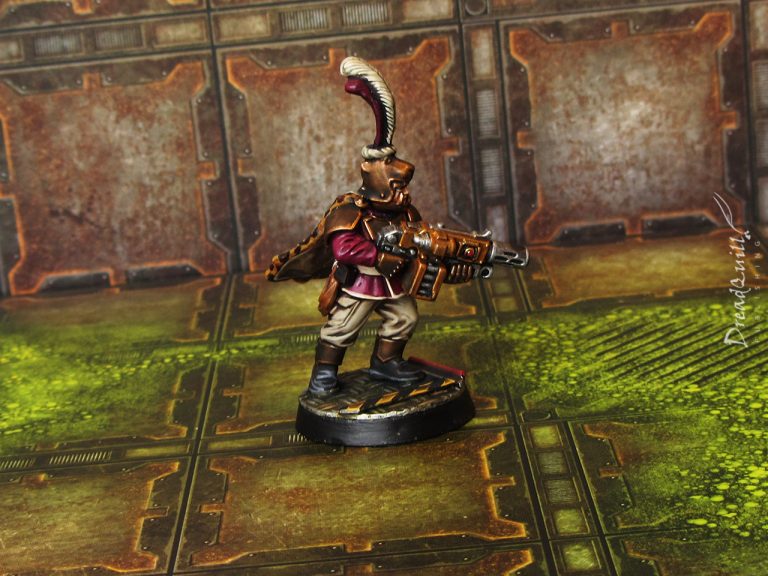 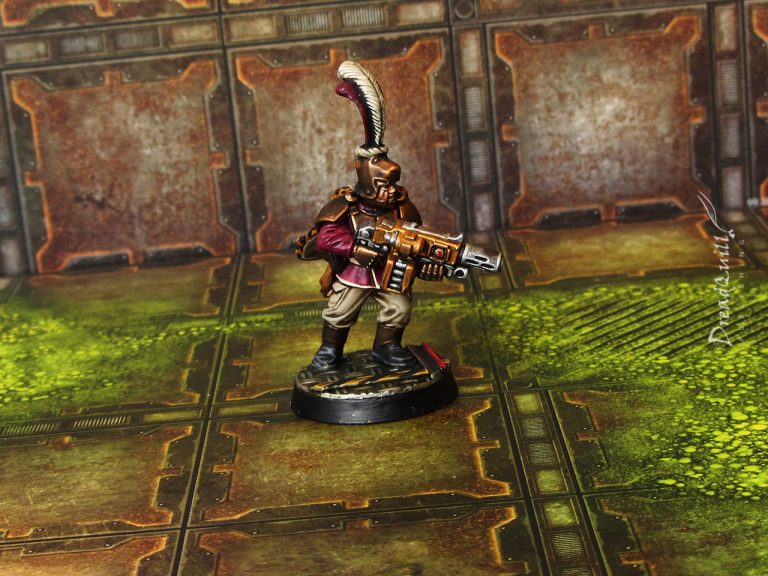 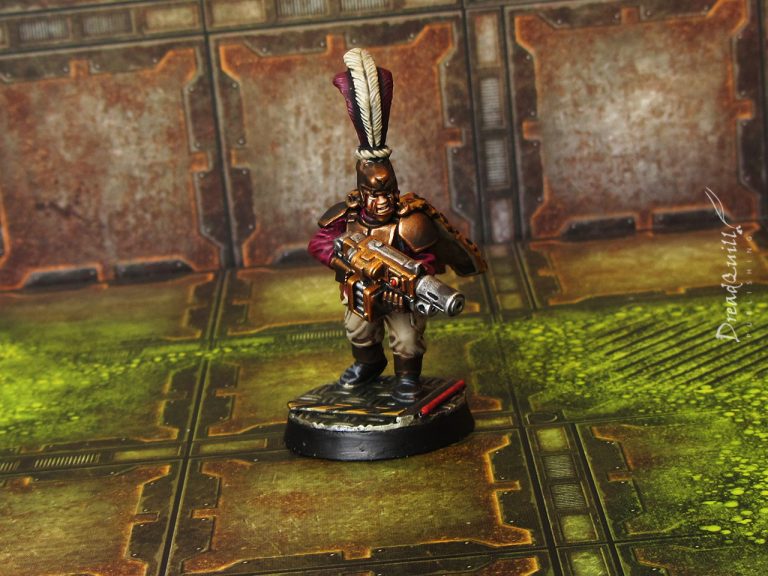 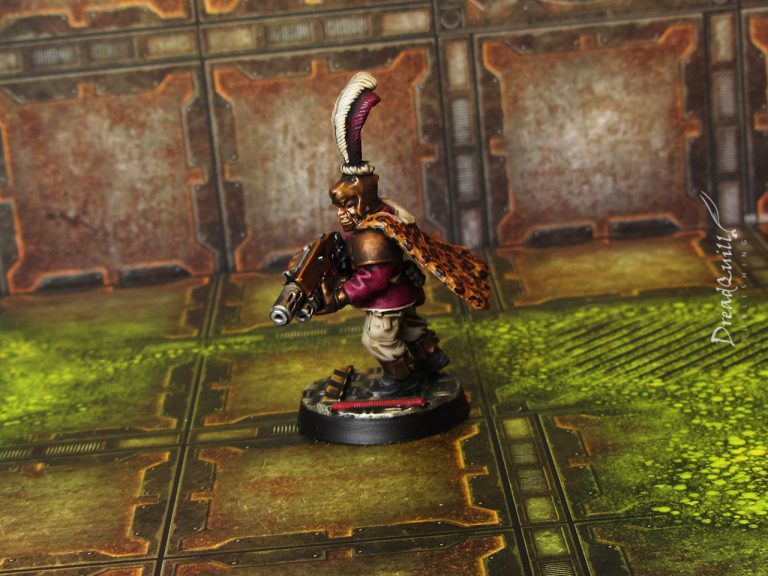 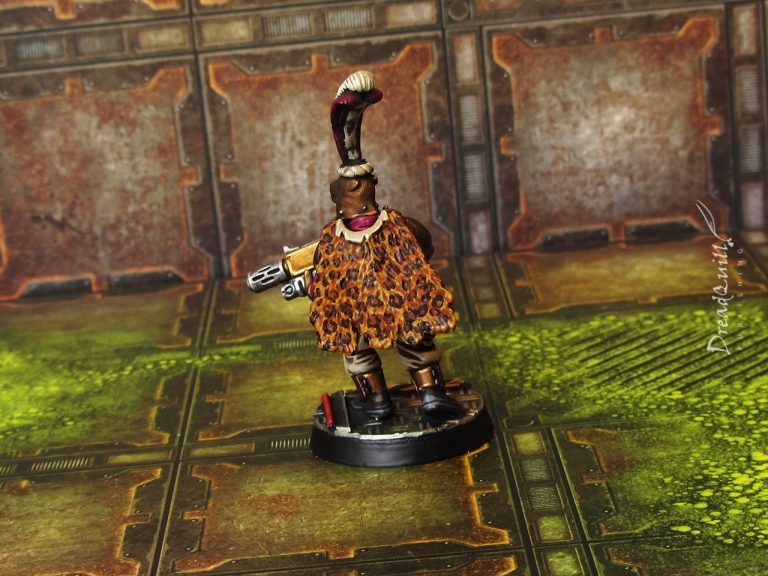 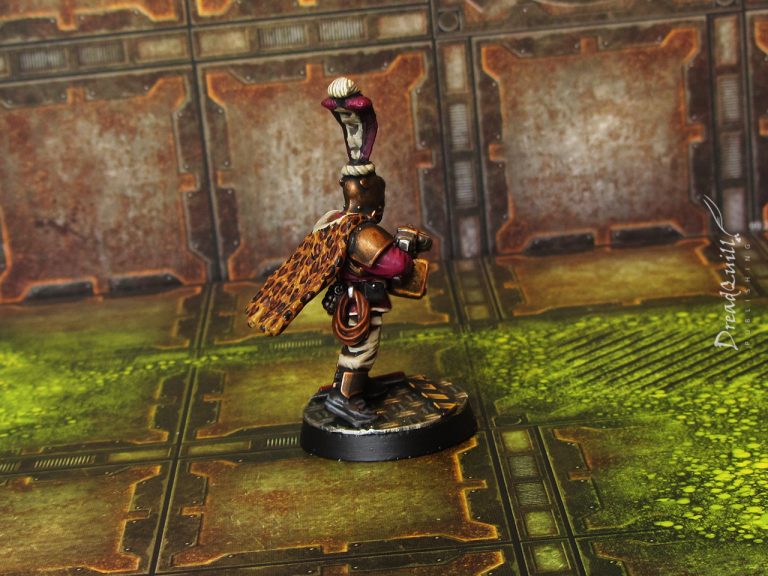