Our Rogue Trader games have been going down really well, and the handful of armsmen I assembled for a warp incursion session went down a storm. The bits worked so well together, they were thematic and, most importantly, colour coordinated with the rest of the Dynasty. The only problem was that there wasn’t enough!

As our team of brave Explorers are regularly taking trips in their Aquila Lander or their recently acquired pimped-out Taurox (keep your eyes peeled on the Orthesian Herald for updates on that one), they always have slightly more than three armsmen in tow. Plus I had a few more Genestealer Neophyte bits kicking about, and it would be rude not to use them up on my favourite kitbash to date…

The process was much swifter this time round. I had already settled on the design, so the only thing I needed to tinker with was weapon configurations and head options.

First up was this rather handsome toothy chap. I’d picked this weapon configuration out for the first batch but was umm-ing and ahh-ing over whether to include the explosives or not. A few sessions later, given our high turnover rate of armsmen, a few extra explosives would certainly make things easier.

This guy had a tricky join – the shotgun wouldn’t sit at a reasonable angle with the holstered pistol, so much shaving of both parts needed to be done to let it sit comfortably. I also did a fair bit of damage to the front of the leg carving off the Genestealer Cult icons, which would be filled in later with green stuff.

Second on the bench is this piece of eye-candy, snaggle-tooth and all. I knew from the off I wanted another guy with a club ‘n’ pistol combo so the other chap would look less like a sergeant. The autopistol was pinched from the Necromunda Orlock box set, as you only get the one autopistol with the Neophytes box set.

Armsmen are military police first and foremost, protecting the crew from insurrection and mutiny by breaking skulls at the slightest whiff of insubordination. I particularly liked the policemanofficer vibe this guy gives off – it’s some combination of heavy gloves, flappy trenchcoat and hat with a little shield on it.

Perhaps my favourite conversion? I love love love the Bretonnian heads – I don’t think this project would have worked without them. Despite them being a 20+ year old plastic kit, and the body/leg combos are monopose and pretty dull, the heads are jam-packed with character I’ve not seen on another plastic kit since. They’re just so ugly. If I could have anything I’d like some ugly lady heads in there too, but a man can dream right?

The gang needed a utility guy – someone who could painstakingly cut open a bulkhead while the players are fending off waves and waves of angry space denizens. It’s an important job, but pretty dull for a player, so best delegated to a loyal armsman with a big chunky backback. Guaranteed to only jam only at moments of extreme peril!

I had assembled a fourth chap as well, an adorable little mushroom-headed armsman whose neck is pretty well shrunk into his chest. For some reason I didn’t take any WIP photos of him, but he’s painted up all nice. 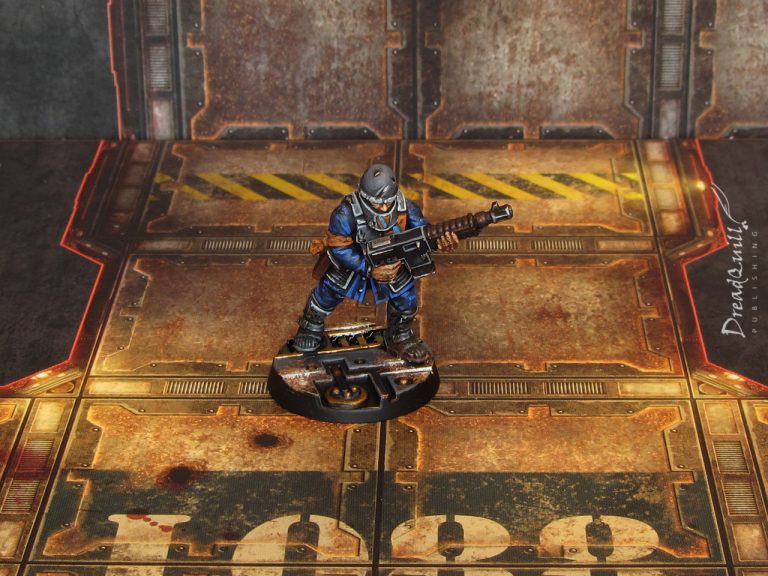 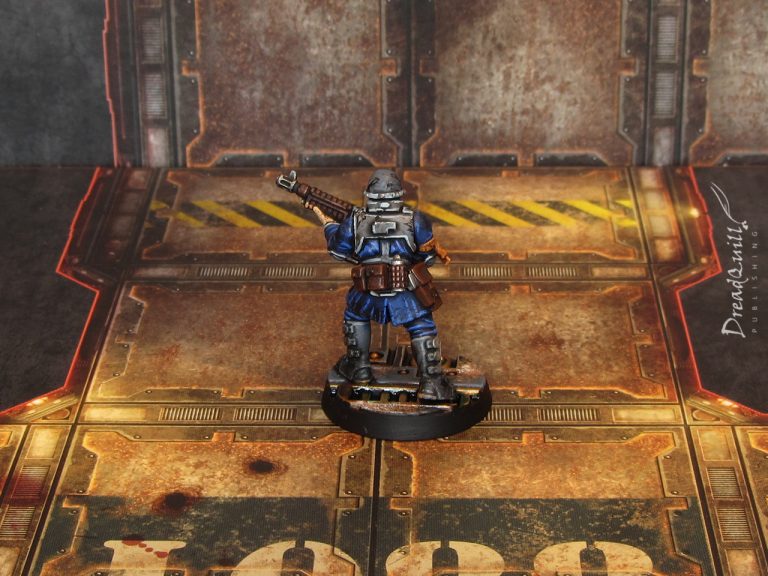 First is my squashed button-mushroom guy. I really liked the head on the Bretonnian sprue, but in my endeavour to shave it down to fit, accidentally removed more of the overall height than I’d anticipated. He looks like he’s receding into his gorget like someone with a scarf against the cold. That, or he was hit on the head by a particularly large piece of falling bulkhead and his spine has never really been the same since. 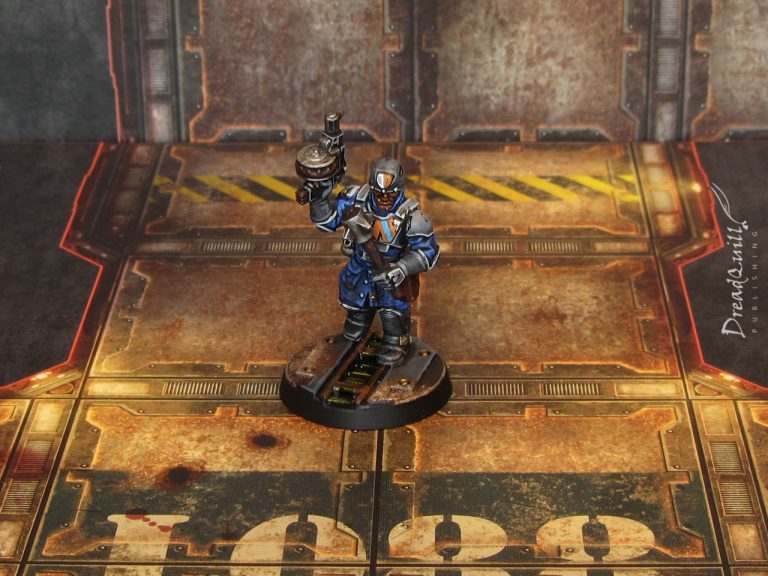 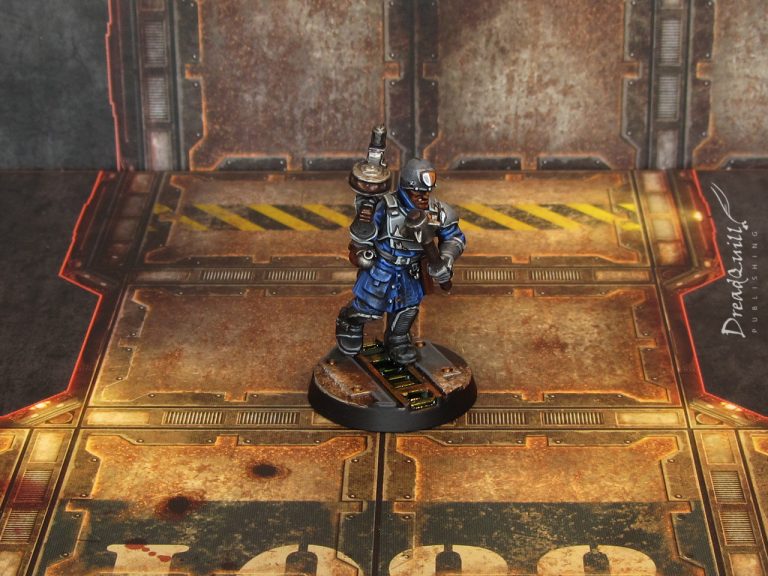 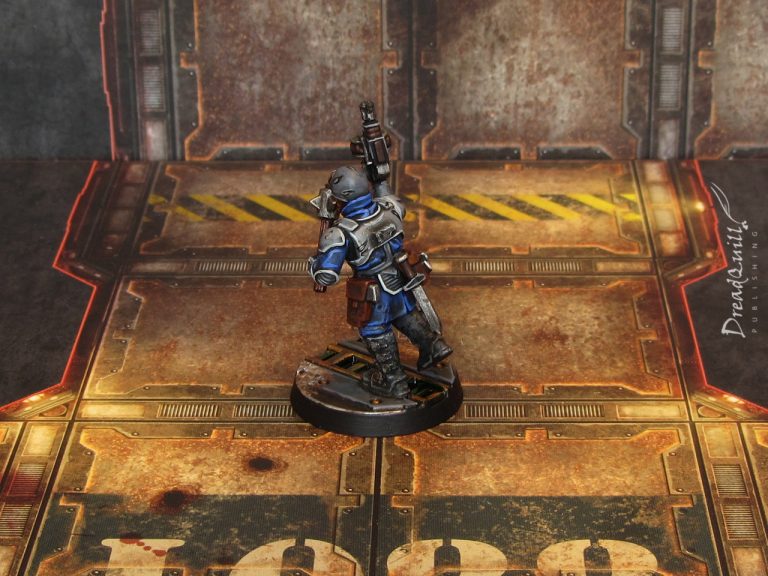 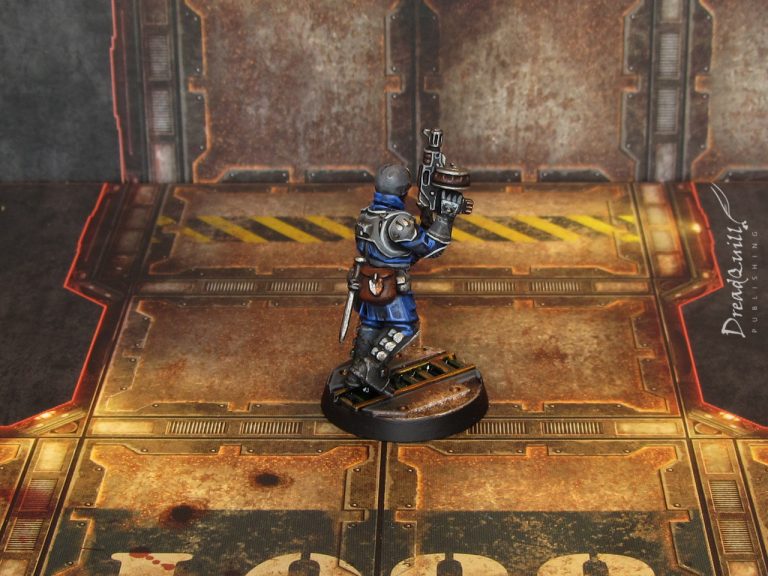 Did I mention how much I love the Bretonnian heads? Well I also love the accessories that come with the sprue too. I’m still trying to justify why there would be pheasants running around the Orthesian flagship just so I can use a few of them hanging off people’s belts.

I had the weirdest sense of deja vu working on this guy though, I couldn’t help but feel like I had painted exactly the same head before, just way bigger. 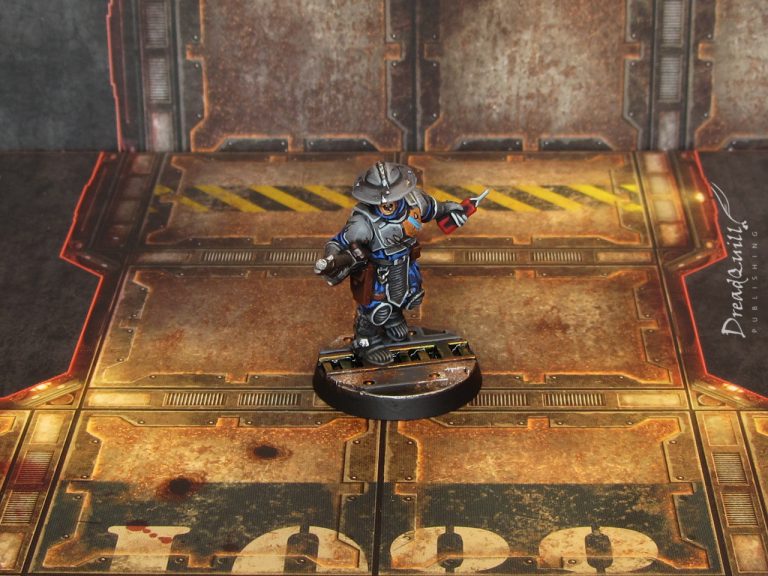 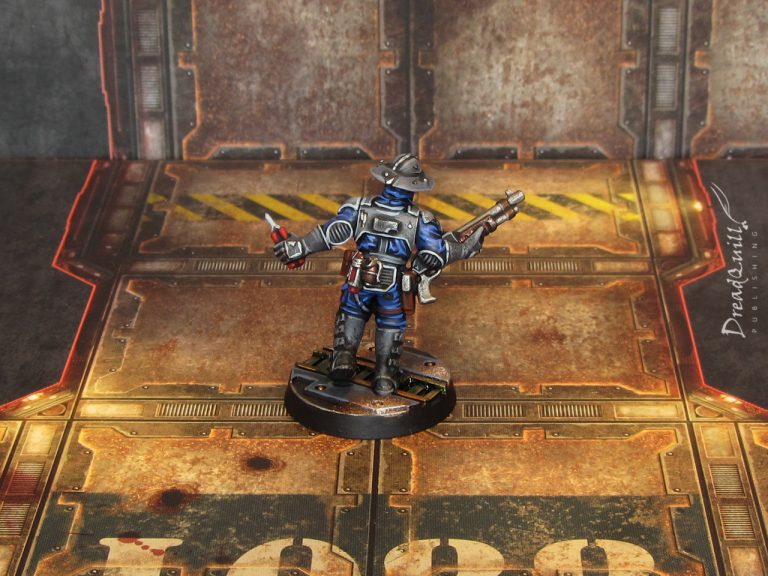 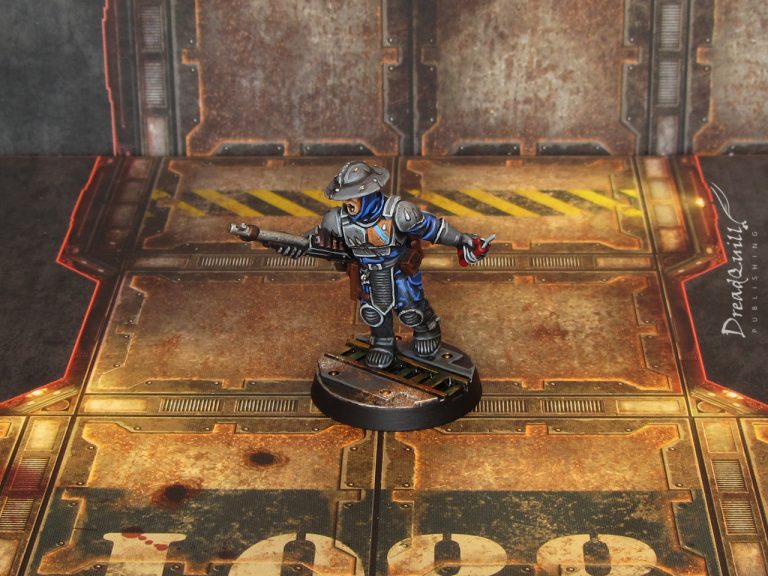 Yeah! Explosions! We’ve not currently had any explosive mishaps involving armsmen, but it’s surely only a matter of time. The belt accessories were pinched from the Escher box set – their strange gas grenade thing was pressed into service as a holder for more blasting charges by painting the interior tube section red. 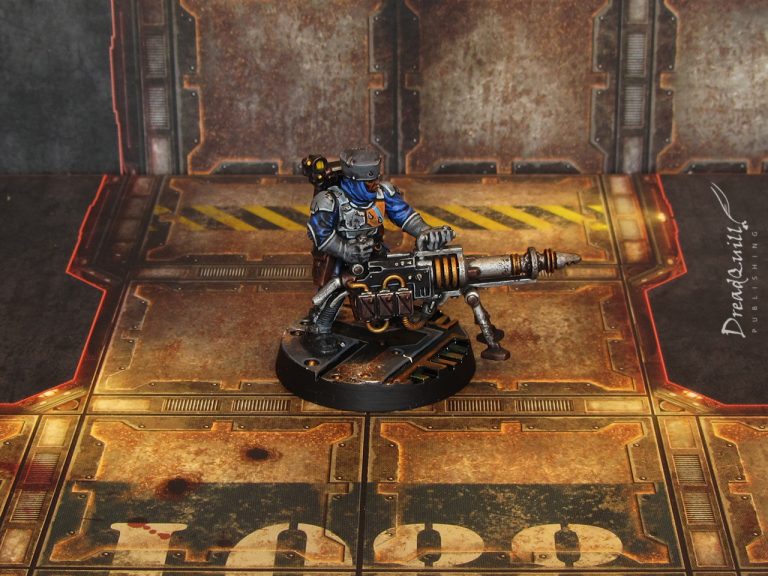 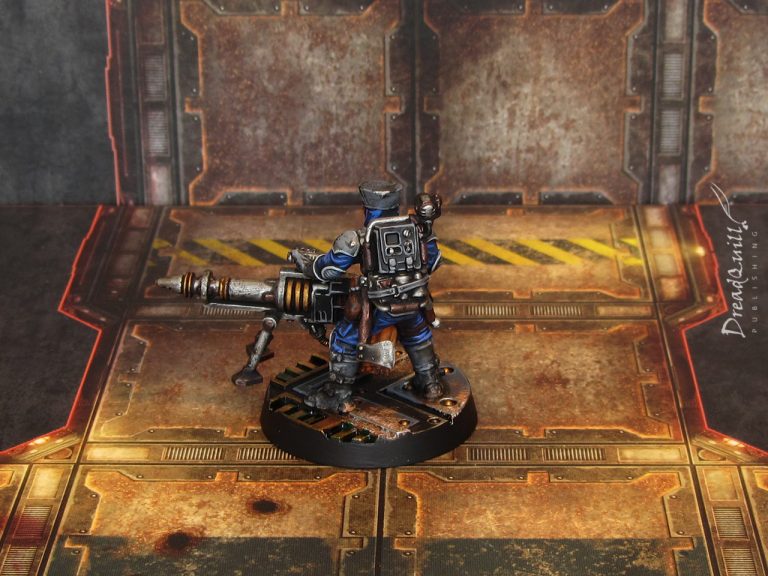 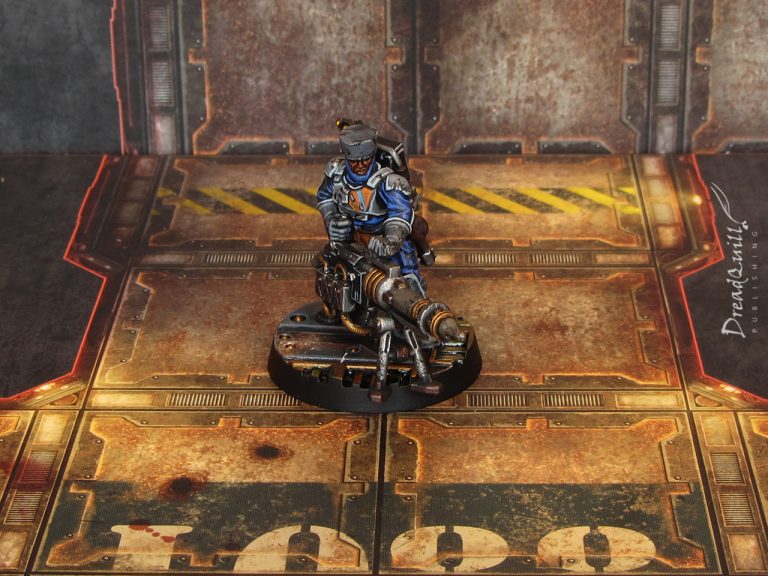 I could have spent hours detailing the lascutter, there were loads of cool little bits and bobs that would have suited elaborate heat damage or object source lighting effects, but I persevered with my 2018 mantra of ‘finished not perfect’ so I could get these guys on the table. I particularly like the little axe and pouch (again, from the Bretonnian kit) on his belt. If the lascutter fails…

And finally, some group photos of the whole gang headed up by Lord-Captain Orthesian himself, painted by Dan Taylor. The Captain will get his own article soon, for now though, enjoy these guys looking like they’re about to drop the hottest war hymn album of the 41st millennium. 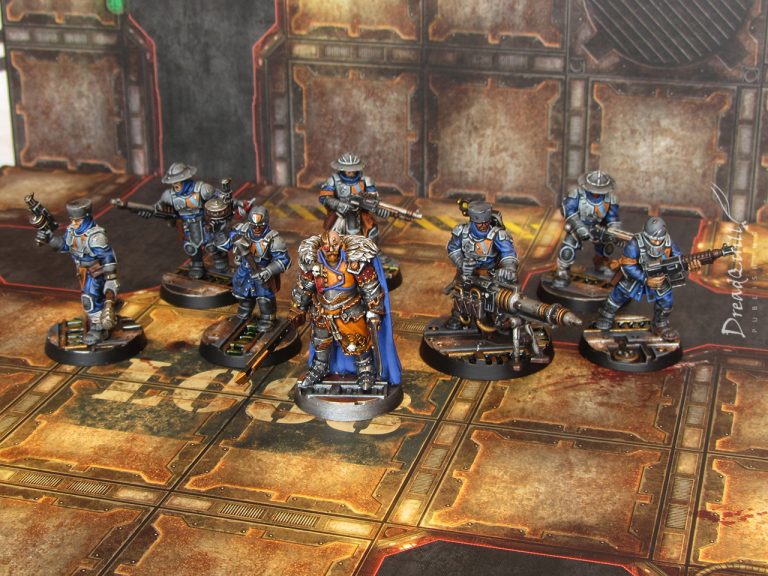 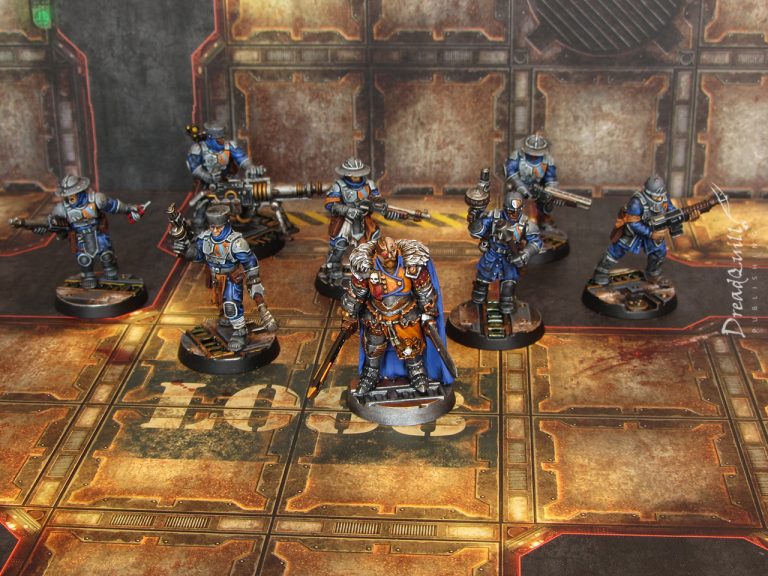 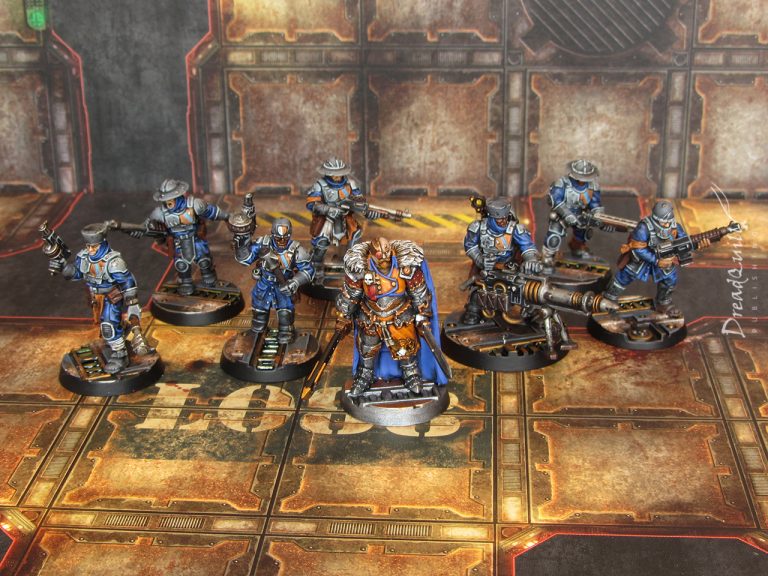