This is the first of a new weekly segment, Meanwhile on the Bench (or MOTB as it will inevitably be shortened to), a section looking at the many conversions and unfinished projects lying around (read: being worked on) the Dreadquill studio. Rather than shy away from public attention and treat my growing to-do list with shame and disappointment, it’s instead time to revel in the bits and pieces that go on underneath the layers of paint and swearing that make up the Dreadquill minis.

This week we introduce the first plucky bunch of Serafin House Guard, “the Glailwroth Few”, for use in our games of Rogue Trader. They are highly trained and educated field troops adapted to the brutal confines of boarding actions and void conflicts of the Serafin Dynasty fleet. They are few and far between, an elite cadre of warriors sworn to protect the Dynasty and its interests. 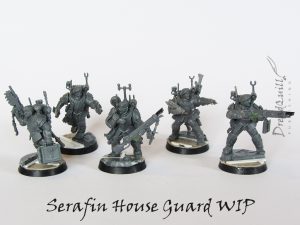 I am currently involved in running two separate Rogue Trader campaigns, the Serafin Dynasty and the Zini Dynasty – the former being a more political/creed/religious game, the latter being a more exploration/piracy game. In the latter, we discovered our love for playing with minis rather than tokens (bottle caps, euros, scatter dice…) and as the Captain would drag as many merry men with her as she could to every encounter, it necessitated some armsmen models.

They were great fun to build (and a pain in the ass to paint), but it left us feeling that our Serafin game was also sorely missing out on some noble cannon fodder to escort our brave Lord-Captain with her on dangerous away missions. We already had some stats for them, we had built them using the Only War regiment builder, so it was just a case of finding some models that fit the bill.

The brief was, in quintessential Captain Serafin style, brief. They were noble-born, well-equipped and well trained. They belonged to quite an old Dynasty that prides itself on artisan weaponry, and ply the space-lanes in a strange old vessel that’s even older than the Dynasty itself. Pomp and circumstance was the order of the day, and the hunt for miniatures began. 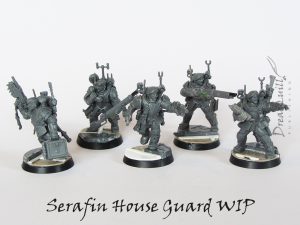 My first port of call was the same supplier I got my other armsmen off, Anvil Industry. They have an incredible range of 28mm sci fi/modern parts that you can chop and change to create unique regiments of fighters, and even a neat 3d model builder so you can preview what the parts you ordered look like. Although there were some neat combinations, none of it screamed ‘fancy-ass toffs who could kick your ass’. The hunt continued.

Many other suppliers were discounted – I needed something ideally in resin or plastic to give me the conversion opportunities I would need, and none of them had that high-tech archaic look I was going for, and somehow I ended up coming full circle round to Forge World and their incredible Solar Auxilia range. I fell in love with the Lasrifle Section, I really dig the Space Colonists vibe they have going for them, which perfectly encapsulated the feeling I wanted for the House Guard. Unfortunately, common sense won out in the end, and no matter how hard I tried I couldn’t justify the price tag. Another project for another time, maybe.

I was about to bin the whole idea when I was in my local Games Workshop eyeing up the Tempestus Scions. They were neat, but not quite what I was going for, and th-OH MY GOD THEY COME WITH MOUSTACHE HEADS. Instant purchase. Turns out in my haste to overlook ‘normal’ Games Workshop models, I didn’t realise that the Scions also come with these dope-ass berets and hard-nut heads. To the bench! 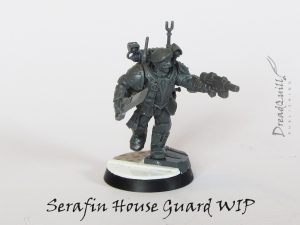 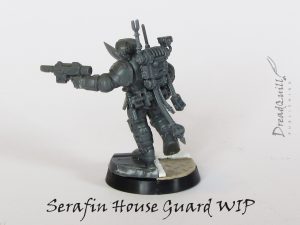 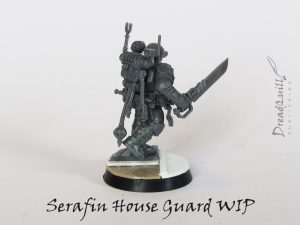 The first guy assembled was the least converted. I wanted to get a feel for the kit before I started mucking about with it. I also had quite a strict equipment list to adhere to, most of which was only sparsely represented on the sprue, so I knew a lot of converting guns was going to have to happen. For this chap, I did a simple gun swap on his left hand. The straight arm was attached to a plasma pistol, not something I wanted on his loadout, and the regular laspistol arm was bent at an angle that didn’t work well with the pose.

Everything else was just adding gubbins from my bits box. I had a bunch of Adeptus Mechanicus backpacks from another project and they fitted perfectly. They further the House Guard from the original Scions models and add that extra element of techy-weirdness that I wanted to get across. The addition of the incense burners and other religious iconography helped further the idea that I wanted these guys to be devoted to their duty and to the God Emperor, so I went overboard on reliquaries, prayer tokens and purity seals. More is more, right?

Quite content with how he turned out, I moved on to a slightly more ambitious task: how does one make a Best Quality lasgun? 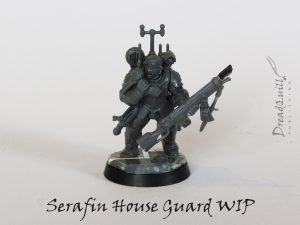 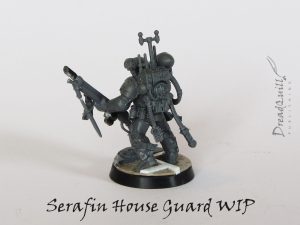 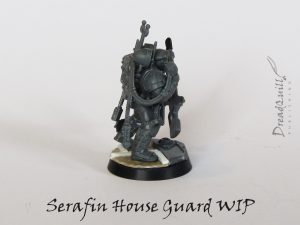 Shouty telephone man was born! I needed a vox operator as the regiment specialises in electro-vox warfare, and I couldn’t bring myself to convert one just for the sake of being different from the box version. After completion, it struck me how presidential he looked, but I couldn’t figure out why. With his right side completed, I just had to figure out how to make him hold what would become an awesome-looking Serafin las rifle.

One of my inspirations was the Vostroyan Firstborn, and after having a rifle through my bits box discovered a bunch of Empire Handgunner rifles. With a bit of careful chopping of the iconic lasgun parts (the muzzle, the charge pack), some careful gluing and filling with green stuff, the look was complete. Long, ornate, form-over-function kinda feeling. It even has a wheel lock on it, which excites me because I can’t for the life of me think why you would have that on there other than to add unnecessary parts to clean.

With the “look” of the lasgun down pat, I felt comfortable knowing I could recreate it on further models. Next guy I wanted to do was a generic “guy  shooting at something” pose. Holding a rifle in one hand is easy to convert, manipulating the arms and rifle butt to fit snugly into a shouldered firing position might be a bit trickier. 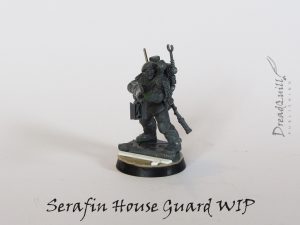 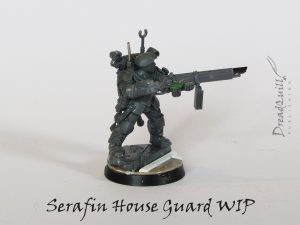 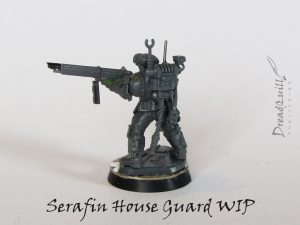 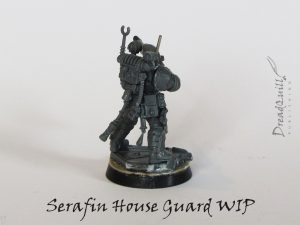 Yep, this was much trickier. In a strange flip-turn of events, the camera here actually hides the damage to the hands, wrists and right arm far better than you can see in person. The muzzle and charge pack swap were straight forward, but the left hand needed to be hollowed out completely to fit further up the rifle to make room for the charge pack in the same place as the first one I made. D’oy.

The right arm also needed a complete remodelling. The default hellgun stock looked radically different from the artisan wooden stock of the Empire handgun, and I’d lose a massive amount of the charm if I had to chop off the rifle grip and hand guard in favour of the easier hellgun option. Essentially both the rifle and the arm had massive amounts of painstaking scalpel work to shave each section down so they joined together as seamlessly as possible. Luckily after spraying, you didn’t notice the join at all, which I was quite chuffed with.

Oh yes, and it was at this point that I realised how fucking fragile the radio masts are on the Scion bodies, note the paperclip replacement.

Next I needed some ‘utility’ guys to round off my selection. I wasn’t sure what models I would need until we played some games, so I wanted to have as large a spread of options to choose from (and I didn’t want to convert up any more of those rifles unless I absolutely needed to). 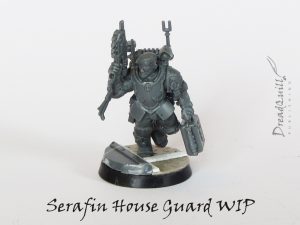 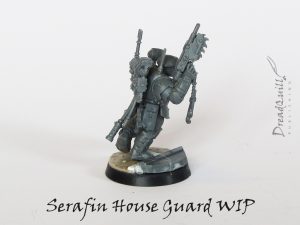 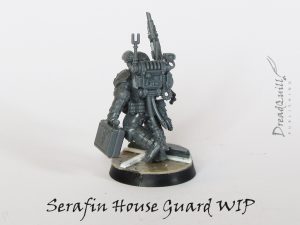 This guy was straightforward – two arms straight off the sprue. He’s the medic, but would also double up as “House Guard NPC carrying the plot maguffin”. I love the weird Gears of War-esque pistol-chainblade thing he has. Although chainblades aren’t rare in 40k, I’ve never seen one on a pistol before, and I couldn’t quite place what kind of weapon it was. It has the middle and rear of a hellpistol, but not the barrel or muzzle. Who knows, it looked cool. Easy conversion, onto the last guy! 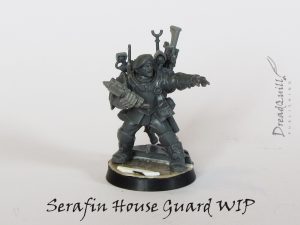 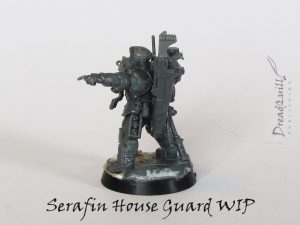 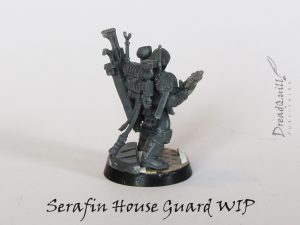 In my dismay I realised that electro-vox warfare also covered the use of scanners and auspexes, so I would need to convert someone holding one. The left arm was a straightforward lift from the sprues, and I evaded converting another rifle by using one of the holstered guns from the box set as well, just changing the stock to make it look a bit more appropriate. The Auspex was hard though, I couldn’t find any ‘open’ right hands, they were all taken up with holding weapons in some way or another. I made a note to look online to order some more to fill my ranks, but that wouldn’t help me in the short term!

Luckily from a previous Anvil order I had picked up a load of bionic limbs, and one of them was an open bionic left hand for holding rifles. A little thumb realignment surgery and (I think) cunningly hiding it behind the auspex was all I needed to convince the casual looker that he was holding an auspex with his thumb on the correct side. Result!

All in all I was very happy with how they came out. I had been given a vague colour scheme to work with – white, gold and ice blue, and I could visualise those working with the esoteric mix of high-tech and religious iconography that these guys are draped in, but that would be another job for another time.

If you wanted to use the Glailwroth Few in your own games, or you just fancied having a look, you can check out the stats, equipment and backstory for them here.