Since Necromunda was re-released last year as Necromunda: Underhive I’ve been hankering to run a proper campaign. I’ve not been a fan of the staggered releases of Gang War books – holding back useful campaign information (such as the completed Rare Trader chart) until Gang War 4 a few months back.

With it finally released and my social obligations spent, I had run out of excuses not to run a Turf War. (I’ll do a bigger post on the Callowdecks campaign shortly, but for now keep an eye on the Dreadquill Facebook and Twitter feeds for more regular updates!) It also meant I could build a gang! 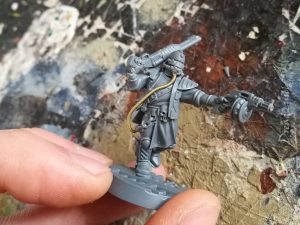 Orlocks were my first gang with old Necromunda – I really enjoyed their purity – and when they released the gang earlier this year I fell in love with the minis. They liked guns with no frills. The vanilla gang. The overlooked option. The ‘human’ option when picking a race for your character in an RPG. The starting pistol from a FPS. 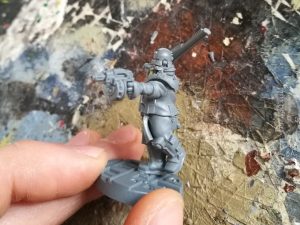 I wanted to make an Orlock gang with a twist. It coincided with my realisation that for all my admiration of the Adeptus Mechanicus aesthetic, I didn’t actually have any traditional AdMech minis. I’d never painted red robes and white cogs, and this would not stand! 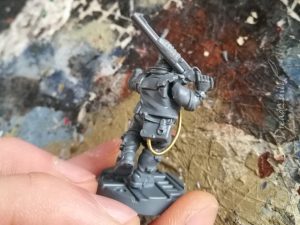 A Skitarii headswap was all that was needed to give it a techy vibe. It needed a little shaving down to fit in the Orlock neck hole, but otherwise was fine. A length of guitar wire to the tool kit thing on the belt completed the look of a makeshift rebreather. 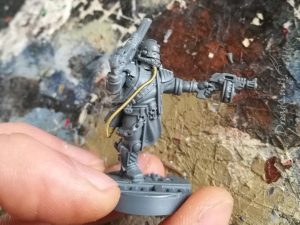 The shotgun was pulled from the Genestealer Neophytes set, with a LOT of shaving away of the claw hand that held it. It was a pain in the ass, but I’m glad I did it.

The final touch was to shave the details down on the right shoulderpad and carve the edge into cog teeth. Not super visible here, but hopefully more visible on the rest of the gang. Another nod to their allegiance without breaking up the Orlock silhouette.

With a bit of green stuff in the gaps left over, the first Orlock ganger was ready to go! 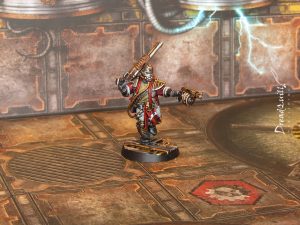 All the colours were layered on over a black undercoat and given a hearty dousing of Nuln Oil wash. Everything was then layered again with the same colour – only the red robe got an extra highlight of lighter red to make it pop. 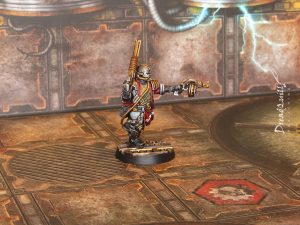 I wanted to emulate the traditional red robes while still maintaining the work clothes aesthetic of the Orlocks, so only the jacket and loin cloth got the Mechanicus red with a freehand cog to further cement his allegiance. 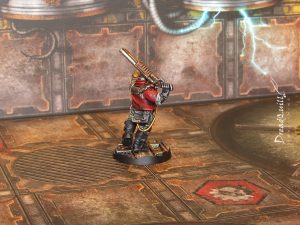 It was at this point I scratched my head about how to do the weapons. Silver and gold was a given – but what colour to do the weapon cases? Red was an obvious choice but detracted from the robes, and dark colours were too plain.

I wanted something fancy, and remembered that the AdMech modelled their super fancy laser guns after ancient Terran weapon designs, and I loved the concept that these tech-mad gangers would go out of their way to replicate that. 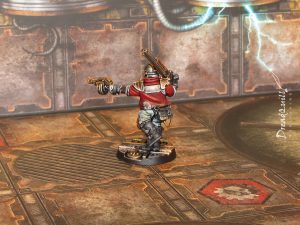 It was this line of thinking that brought me back to a personal fascination of mine – the Mysteries and Warnings of the Adeptus Mechanicus. A kind of Ten Commandments for the cogboys, these sixteen statements are what they base their weapon-worship around, and how they justify doing all the illogical (but cool-looking) things they do. 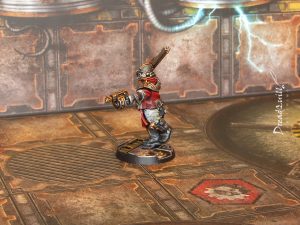 Although these gangers would be mere menials in Mercy’s weapons factories, their devotion to their Adeptus Mechanicus masters and slavish commitment to tradition meant one of those commandments stood out to me the most – “To break with ritual is to break with faith.” If they don’t make their weapons out of wood (a tricky thing to do in space), they couldn’t call themselves really devoted to the Omnissiah.

The live by the last commandment, the 16th Law, and I knew there and then that’s what their gang name would be. 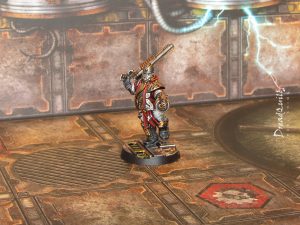 I’m very happy with how he turned out, and I’m excited to do the rest of the gang now! Roll on the campaign!