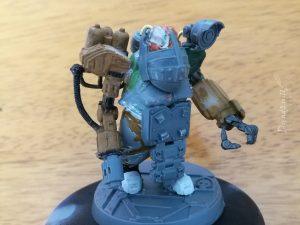 Our Necromunda Callowdecks campaign has been great fun, and it’s presented me with a bunch of cool new modelling challenges too.

One of those challenges was to produce a ‘robot automata’ model as represented in the ‘Archeo-hunt’ scenario. Basically you use a big stompy robot that stands in the middle of the map and gangs have to fight for control over it, guiding it to a vault to break it open and steal the goodies inside.

It hilariously recommends using the Ambot model, recommending it as ideal to represent the automata. A bit dry, considering (at time of writing) they’ve not even announced the Ambot model (despite us knowing it exists from a grainy image in one of the Gang War books) let alone have it available for sale.

Additionally, one of the generic Brutes you can purchase is an Ogryn Servitor, complete with plasma hand for when you don’t just want to knead and punch something until the consistency of skittles is achieved, but you also want to set it on fire too.

Time to crack out the bits box. 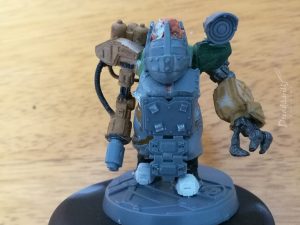 This guy was going to stand in as both ‘generic automata’ and ‘Ogryn servitor’, so the weapons needed to be generic enough to represent whatever was on those stat lines. In this case, it was big hitty hand and melta gun/plasma cutter, so something suitably shooty in the other hand.

The base was the last plastic Ogre Kingdoms mini I had in my possession from the Bag o’ Doom and it was heavily soiled in thick paint. I’m lazy, so I just scratched most of it off with a knife. Finished, not perfect! 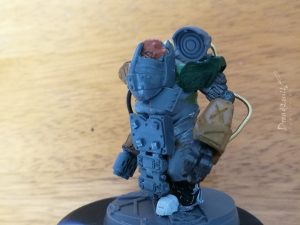 The face piece was from a plastic Lord of the Rings armoured troll helmet turned upside down, the belly plate from some Ork vehicle.

The arms came from a bunch of toys that were recycled from a friend’s old office space – they were going to be thrown out, so he harvested all their tech arms and donated them to my bits box. I couldn’t tell you where they were from – perhaps transformers? Regardless, they’ve been too big to use on most projects I’ve done so far, but they were the perfect size for this one. 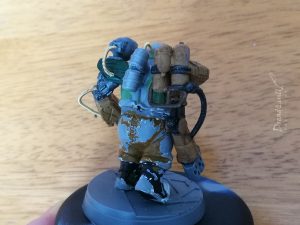 Cables were made with trusty guitar wire, the thickest I could find. I’ve not tried bass guitar wire yet, but I’ve got a few more beep-boop projects ahead, so there’s still time!

The Ogre Kingdoms range come with adorable little Sinbad slippers, which wasn’t quite the aesthetic I was going for. I shaved the toes down and stick on some heavy shoulder pads from Anvil Industries to give them a reinforced look. A searchlight from an Imperial vehicle sprue finished off the Angry JCB look I was going for. 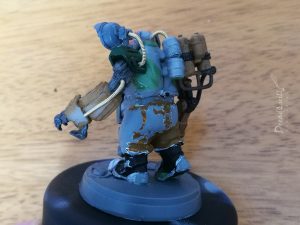 All told I’m very pleased with how he came out! Considering he was nothing but a bunch of weird bits and cables for a long time, I’m excited to slap some paint onto him. I’m not super excited about the prospect of painting so much yellow, though…