In a previous episode of our long-running Rogue Trader game our plucky band of privileged plunderers stumbled across a custom Taurox, left behind by the previous noble inhabitants. The inhabitants were in no real position to refute the claim of its new owners, and the Orthesian Dynasty rode off into the sunset with their brand new whip, quickly dubbed ‘War Pig’ after shooting a palace in half with its main guns.

“It would be terrible if they got into a combat situation and I didn’t have a suitable proxy model for it” I chanted in my head as I handed over my cash at my local game store.

So I was the owner of a brand new Taurox, and the first vehicle I have painted in almost half a decade.

One in the pink

I wanted to do something fancy with it. I mentioned it was a converted Taurox, the original owners modifying it to protect them from the peasantry and look hashtag lit while doing it, so it needed something a little different to make it look less military.

I came across this super cool Taurox from Mr Pink’s instagram while aggressively googling Taurox conversion ideas. Couldn’t be that hard right?

So I was going to lower my Taurox, keeping it looking butch but with a slight hint of roadster. Time to begin assembling the chassis. 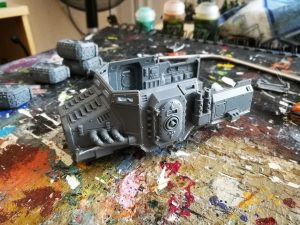 The first thing that had to go was the mudguards. No combination of dry fitting was going to work – there was no wiggle room at all for raising the wheel height and lowering the chassis while they were still attached.

Otherwise, nothing else at this stage looked like it needed work doing to it. It still needed the carry capacity so i wasn’t about to trim its booty down any, and there were no real alternate assembly options, so it was time to crack on with attaching the wheels.

I couldn’t find any guide to help me with this, so I ploughed ahead with the most powerful tool at my disposal – optimistic guesswork. 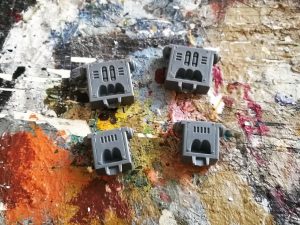 These little sluts attach the inside of the wheels to the bottom of the chassis. The chassis practically touched the floor already, so it was going to need a fair bit of work to lower it (or give it the illusion of being lowered) without it scraping the floor. 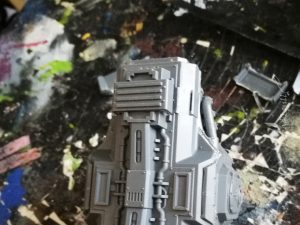 Normally this three-striped part sits vertically, locking the t-shaped wheel legs onto the chassis and giving it plenty of surface area to glue to. I opted to ignore this and create my own bastard child.

Spinning it 90 degrees gave me a little bit of extra height and the much missing extension away from the body – the wheels simply couldn’t be lowered any more without being further away. 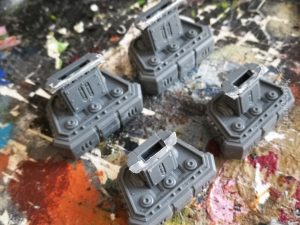 The wheel legs (that’s what I’m calling them now, get with it) were rotated 180 degrees in their sockets. This gave me a lot of dip and sufficiently lowered the frame, but presented a complicated problem for attaching it to the chassis. I hacked away a wedge at the end of each leg to make them sit more flush with their new position. 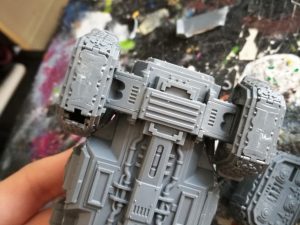 A perfect fit! It protrudes a good centimetre out from either side and glued to the weird sideways plate without much hassle. It was at this point I also realised there was a slight miscast on one of my track parts, but at 1am I couldn’t really be bothered putting in a request for a new piece and was just gonna fill it in later with weathering. 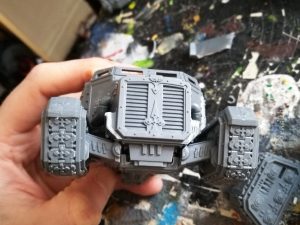 And a view from the front, it’s a pretty good fit! I’ll go back and fill in all the gaps later, but nobody is all that bothered about the underneath of a vehicle anyway. Time for the back wheels. 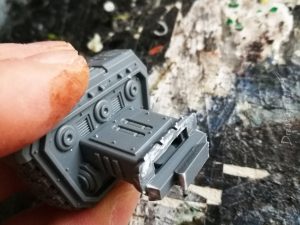 These suckers were a bit more problematic. There was less room at the back for wheels to be flush with the bodywork (the Taurox has a big ol’ booty) to they needed padding to extend far enough out from the connection point on the chassis. Some knackered bits of sprue will help here! 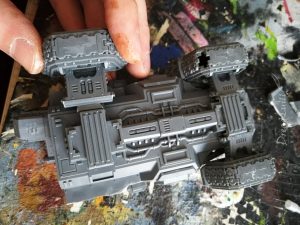 Fits very pleasingly! Sure the join isn’t super flash but who cares? The only time people will be looking at this is when it’s in a smoking heap on the floor because the Voidmaster took it off one ramp too many. 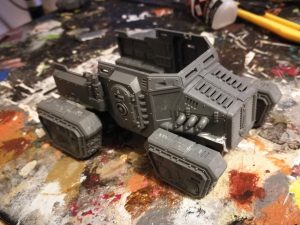 I was very happy with the overall silhouette. Crouched low to the ground, ready to pounce. To me it looks more maneuverable as well, giving those wheels extra room to move around. Time to weaponise it! 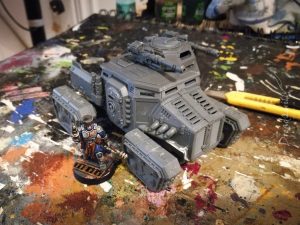 It had already been written in with autocannons, and there’s a pleasingly brutal fancy to them that the other weapon options didn’t really tickle. I tinkered with having a ‘none’ weapon options hatch, perhaps with some observation equipment, but nothing really came of my bits bashing.

I assembled the rear of the vehicle and worked out how I was going to populate the driver’s seat. It was almost inevitable that one of the PCs was going to be driving it, but the model didn’t seem right without a driver, so out came the bits to see what options I had. 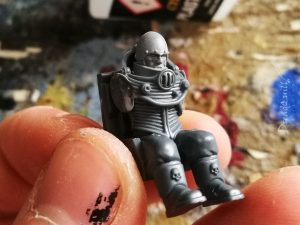 The combination of Bretonnian heads and sci-fi bodies was becoming ubiquitous in my Orthesian conversions. I figured the drivers/pilots probably had a little more high-tech jackets than the armsmen, so I opted for one from the Genestealer Cult Neophytes kit. 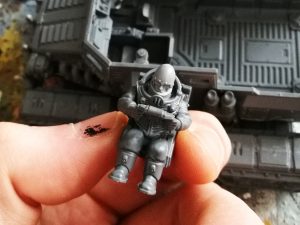 His arm and hip joins needed shaving down to fit the flat-sided parts of the original driver, but that wasn’t an issue with a sharp craft knife. 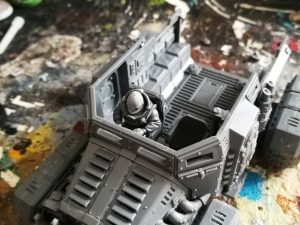 Noot noot! With the driver in place, I was happy I didn’t need a gunner – he was all the scale that was necessary.

The only part that I had still to decide on was the front grille. The kit comes with a very cool grille that I desperately wanted to use, but no longer fitted the silhouette of the vehicle any more. I also wanted to affix lights to it, but with the mudguards gone I couldn’t fit them on top of the wheels any longer. They needed to go somewhere else… 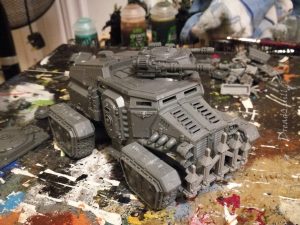 With a bit of shaving I discovered they fitted perfectly around the outside of the nose of the vehicle; they couldn’t look any more like porcine nostrils if they tried. After digging around in my bits box I also stumbled across a set of spikes from the front of an old Sisters of Battle Rhino, and their Gothic-But-Chunky appearance (title of your sex tape) gave me the perfect flare I was looking for. 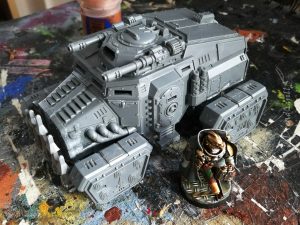 And it was finished! I’m very happy with how it came out, and unfortunately I’ve found myself in a position where I need to actually paint the bugger now. I’m still not happy with the amount of flare on it – I’d like a few more gothic stylings, perhaps some railings across the top of the wheel covers, or some kind of gargoyles to break up the flat surfaces. I do have a few gothic buttresses from a recent project… 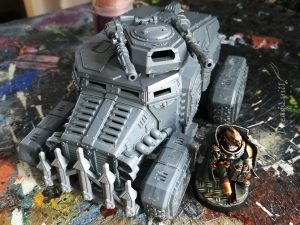